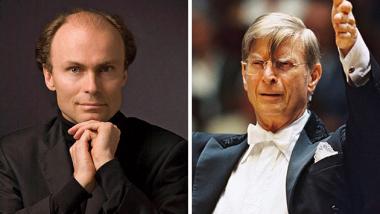 Brilliant programming and inspired performances combined in nearly ideal proportions in the San Francisco Symphony's all-Brahms concert on Saturday, which featured his first big hit, the German Requiem. Above all it was a great night for the Symphony Chorus who, together with their director Ragnar Bolin and Conductor Emeritus Herbert Blomstedt, brought the music alive, both acoustically and more importantly in its deepest spiritual dimension.

The concert showed the trajectory of Brahms life in flashback. Beginning with Four Chorale preludes from Op. 122 including “Oh, World I must leave thee” was not your usual program opener, especially in a large hall, but it set the stage perfectly. Despite challenge of playing these pieces on the huge five-manual instrument at Davies, the ever-masterful Jonathan Dimmock preserved their intimate character, finding registrations that conveyed a combination of delicacy and urgency.

I recently heard the motet, Warum is das Licht gegeben dem Mühseligen, (Why is the light given to those who are sorrowful) in a wonderful performance by Ragnar Bohlin's other ensemble, Cappella SF. While the smaller group of solo voices would seem to be more suited to the piece, the larger ensemble worked as well and the wide range of dynamics Bohlin evoked from them created an intimate effect.  The chorus made me shudder at the intonation of those repeated cries of “Why?” It perfectly posed our response when we are moved by life's tragedies and confront the ultimate questions of life and death.

Brahms began his Requiem while still in his twenties, after the death of his mentor, Robert Schumann. As with the symphonies, Brahms felt the shadow of Beethoven looming over him.

Beethoven's footsteps are heard early on the Requiem. Hearing 150 voices of the Symphony Chorus coming from “on high” in the stage balcony of Davies Hall, intoning the big crescendo in the second movement, I thought, this is why we go to concerts. Under Blomstedt’s firm yet subtle baton, it was like a dirge that dances, and as the first great climax of the work approached it was impossible not to be carried away by the combination of somber grace and absolute inevitability.

“… as the first great climax of the work approached it was impossible not to be carried away by the combination of somber grace and absolute inevitability.”Brahms was accused of writing ungratefully for the baritone soloist after the first performance of the Requiem. I doubt this criticism would have occurred to anyone hearing the voice of Christian Gerhaher thoughtfully uttering “teach me to know the number of my days.” For once, it didn't sound operatic. To his urgent plea for spiritual comfort, which was likewise understated, the chorus answers, “Lord I look to thee”.

It was here that the deeper levels of Blomstedt's interpretation began to emerge. “Wie lieblich sind deine Wohnungen,” a kind of intermezzo for chorus alone had a dreamlike lilt that was irresistible, which perfectly answered the plea heard in the previous movement.

Brahms breaks the rules and avoids cliché, as when he sets “You now have sorrow,” which uses a major key to address the need of both the dying and those who are mourning. The composer offers a deceptively simple dialogue between chorus and solo soprano, here the marvelous Ruth Ziesak, who found just the right combination of sadness and hope to make us wish for and believe in the words “I will see you again.”

One of the many miracles of the penultimate movement “We have no continuing city” is that the chorus avoids a cadence in the home key for the first four pages. Its harmonies – Arnold Schoenberg called them “roving harmonies” – compare our spiritual state in this world to a  transient existence on the rootless pavements of our cities.

Again Gerhaher provided a perfect transition from chorus to soloist. “But I will tell you a secret,” in the literally unheard of distant key of F-sharp minor had just the right combination of mystery and certainty that led to the climax of the work.

The last trump, or rather Trombone, in Brahms's orchestra, sounds as the chorus finally emerges as the true hero, transforming, as Beethoven did, the key of greatest travail to one of joy. The great final fugue in C major showed the chorus in full radiance and Brahms, who never addresses the Deity directly, reveals it, though the voices of men and women as “worthy of all Honor, Glory, and Power.”

The Requiem's outer movements both begin with the word “Selig” (blessed), uniting those who mourn and those who have died. With the words, “Ja, der Geist spricht” – Yes, the spirits speaks – I imagined I heard Brahms himself speaking and including his listeners among the blessed.