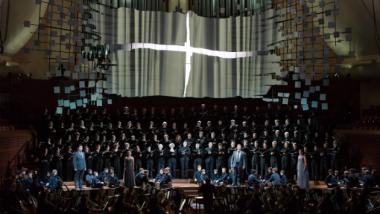 If beginning the San Francisco Symphony's Beethoven festival on June 10 with a performance of the Missa solemnis doesn't seem audacious enough, the accompanying production made it so. Imagine a semi-staged multimedia version of the work, complete with a light show, soloists wandering between the orchestra and chorus as if lost through the entire work, and a boy's choir flooding the stage, almost as if real life angels were appearing out of nowhere. When concertmaster Alexander Barantschik left his chair next to the podium and showed up in front of the chorus to weave the violin obligato in with the soloists as they sang like angels “Blessed is he who comes in the name of the Lord,” it was like a hallucination. He had indeed arrived.

I doubt even the composer could have imagined how modern technology would infiltrate this “sacred” work of his, which in part draws upon musical languages such as Gregorian chant and even fugues that had become such an important part of his late works. Just as the classical music style had been replaced by the operatic Rossini craze, it would seem that, with this performance, solemnis had been taken out of the title and replaced with “show-biz.”

Obviously a great deal of trouble and rehearsal went into turning Davies Hall into a sort of psychedelic cathedral, where flashing lights and motion never ceased except between the movements when Maestro Michael Tilson Thomas paused just long enough for us to prepare for the next “trip.” This made a dynamic contrast between the Kyrie, which showed the soloists pairing off  according to Beethoven's pairings of the voices in duet, and the Gloria, in which all caution was thrown to the winds in as thrilling a hymn of praise as could be imagined.  The Credo movement took on otherworldly proportions, and not just because the incarnation, crucifixion, and resurrection were depicted on screen, graphically in line drawings that pulsated in rhythm with the music.

The Credo movement took on otherworldly proportions, and not just because the incarnation, crucifixion, and resurrection were depicted on screen, graphically in line drawings that pulsated in rhythm with the music. It was the fluid movement between these cosmic events that allowed the listener to give way to feelings of reverence, awe, and extreme grief before the final apotheosis carried us all away: “Et vitam venturi saeculi, Amen”  (And the life of the world to come. Amen.)  Beethoven depicts this in music that seems to lift us out of not only our seats, but from all of the cares and tribulations that he himself knew so much about.

The final two movements were done simply and in a way that would have touched the deaf Beethoven, who had to see to know that he was being applauded.  The Sanctus began with soloists placed in the high, right balcony with members of the angelic boy-choir taking the upper parts. In the final movement, the warlike trumpets and timpani are placed in the corresponding left balcony. I doubt if there was any political implication, but it did pose an interesting image of our current ideological divide, with opposing parties positioned high in the nave of a cathedral, comforting or threatening according to our dispositions.

The opening solo of the Agnus Dei, in the key of B Minor, so rarely used by the composer, convincingly brought the powerful bass soloist Shenyang to his knees. This was the most personal moment of the entire production, and interpreted the compassionate gestures of the other soloists standing helplessly nearby to represent the human contact that the composer craved. When the final Dona Nobis Pacem arrived,  Beethoven's fervent plea for “inner and outer peace” seemed to be granted.