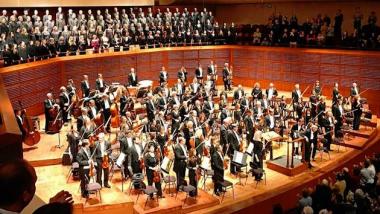 Ever since Herbert Blomstedt retired as music director of the San Francisco Symphony in 1995, he’s returned for two weeks every year to perform programs strong on the German and Scandinavian classics he specializes in, freeing his successor, Michael Tilson Thomas, to focus more on other things, though he does these works well too.

The concert at Davies Symphony Hall on Wednesday, February 1, was a perfect encapsulation of this principle. The program consisted of Beethoven’s Symphony No. 9 in D Minor. Nothing else, just the Big One, “the symphony to end all symphonies,” as preconcert lecturer Alexandra Amati-Camperi called it, following Wagner, who considered it impossible to outdo the Ninth in symphonic form. (It took Mahler to prove Wagner wrong.)

A Blomstedt masterwork performance always begins with tremendous energy and drive. The open question is, will it end as it began, or lose steam along the way? This one kept it up in a spectacular manner.

The first movement was a forward-driving epic, as punchy as Beethoven gets with many exclamations from brass and timpani. The Scherzo had the same intensity and punchiness, except this time it was at the service of a cradle-rocking rhythm instead of epic grandeur. The Adagio, played at a zippy clip — the entire symphony took about 67 minutes, brief for the Ninth — featured a strong line, especially fine when the violins were spinning elaborate variations.

Blomstedt’s most remarkable achievement came with the finale, the grand choral “Ode to Joy.” He took the epic, the rhythmic, and the lyrical from the previous movements and mixed them together into a complex and tasty stew. The result was that, for once, the vast and diverse “Ode to Joy” felt like a summation of what came before, instead of a new departure.

Conducting without a baton, Blomstedt kept the music taut throughout by regularly building up tension to miniclimaxes. Tiny hand gestures, repeated over and over, matched with Beethoven’s repeated phrases to build up the structure. At critical turning points, such as key changes, Blomstedt would draw out chords in long suspenseful moments.

In an arrangement that was unique in my experience of the Ninth, the solo singers sat up in the terrace with the chorus, and came out at the beginning of the work, instead of interrupting it at a movement break. Bass-baritone Andrew Foster-Williams gave a free and easy, gesture-filled opening solo, which rode effortlessly over the distance from the back of the stage. Tenor Nicholas Phan was smooth-voiced but less commanding. Soprano Kiera Duffy and mezzo-soprano Sara Couden, who have less to sing, chimed in well.

As for the Symphony Chorus, it’s fortunate that these 115 or so singers were in the back, because they fairly blasted their way over everything. Chorus Director Ragnar Bohlin organizes a magnificent sound. The strength was achieved without any detectable evidence of the strain that makes the Ninth so infamous among choristers, especially sopranos.

The purpose of playing a masterwork over again is twofold: to allow listeners to hear it with fresh ears, and to thus renew appreciation for the work’s genius. That was achieved here. Blomstedt at his best is unsurpassed at executing a meaningful quest to the end of the symphony.