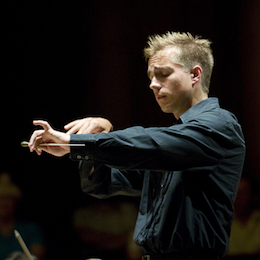 The marquee names on the San Francisco Symphony’s program on Thursday, at Davies Symphony Hall, were Béla Bartók and Ottorino Respighi. The music kept reminding me, however, of a composer who wasn’t on the program at all, Maurice Ravel.

That effect may have been due to the style of the guest conductor, Vasily Petrenko. Russian by birth, Petrenko has been working in Britain for several years, conducting the Royal Liverpool Philharmonic among others. The experience may have softened the severe Russian manner he still displayed when I saw him on his first guest appearance with SFS, over two years ago. He’s let his close-cropped hair grow out slightly, and the Rachmaninov-like scowls of concentration are gone, replaced by a gentle smile.

He’s also gone in for broader repertoire, with increasing mastery. (On his first visit, he offered Shostakovich — which was very good — and Grieg — which was rather poor. Last year he returned with an impressively convincing performance of an English favorite that few foreigners comprehend, Elgar’s First Symphony.) True, Respighi did go to Russia to study composition with Rimsky-Korsakov. Yet while some see resemblances to Rimsky’s sumptuous Scheherazade in Respighi’s The Fountains of Rome, to my ear, particularly in Thursday’s performance, it had more of the clean shining color of Ravel works like Ma mere l’oye and Le tombeau de Couperin.

Certainly Respighi had one thing in common with both Rimsky and Ravel: He was a superb orchestrator. Fountains is filled with remarkably distinctive-sounding pairings of instruments playing themes together; oboe and cellos, flute and celesta, English horn and French horns, combinations that, when played with absolute precision, as SFS did here, make a new sound unlike either of the components.

Fountains is filled with remarkably distinctive-sounding pairings ... when played with absolute precision, as SFS did here, make a new sound unlike either of the components.

A few years after the success of Fountains, Respighi composed a follow-up, The Pines of Rome, on the same plan: four scenic portraits of Rome run together into a single unit, with more of his colorful orchestration. Despite the similar plots, there are some differences between Fountains and Pines. Pines is larger in scale; it relies less on the sparkly celesta and glockenspiel sounds and wave-like string figures that give Fountains its aquatic air; and it has its climax at the end instead of in the middle.

Pines also gives greater scope for individual solo parts. Although its loud climax is what audiences stand up for, what impressed me on this performance was the skill and hushed elegance of the quiet solos. Carey Bell’s carefully leaping clarinet in the “Janiculum” movement, Russ deLuna’s English horn in the distant quietude of the opening of “The Appian Way” (here, too, the horns, playing “as quietly as possible” as the score instructs, were also magnificent), and particularly Mark Inouye’s liquid offstage trumpet in “Catacombs” (this one marked “as distantly as possible”), were the most conspicuous of many great solos.

The Respighi tone poems are not tremendously complex works to conduct, and a good performance reflects more on the skill and talent of the orchestral musicians than on the quality of the conductor, except insofar as the conductor is the one who leads them in doing it, and, more vitally, sets the loudness of the music, both overall and in the balance between the instruments.

He also sets the tone and style. If the Respighi tone poems in these performances were reminiscent of Ravel, then Bartók’s Piano Concerto No. 3, the other major work on the program, could have been Ravel’s No. 3 by the same token. A light, crisp, Ravel-like reading by Petrenko and the orchestra, accompanying an enthusiastic and cleanly enunciated performance by pianist Jean-Efflam Bavouzet, enlivened the genially fast outer movements. Most outstanding, however, was the central Adagio, broad-lined and graceful.

The program’s brief opener, Fratres by the contemporary composer Arvo Pärt, was dour and as unlike Ravel as possible. This work exists in a dozen different forms; the one heard here is for string orchestra with percussion (claves and bass drum offering brief interjections in unison). One of Pärt’s purest exercises in “holy minimalism,” written in an odd scale of his own invention, Fratres consists of one brief phrase, twice slightly extended, then all three inverted; the whole is then repeated eight more times, each time at a slightly lower pitch. That’s it. The repetition either moves the listener to a state of rapture or it does not. I do not find Fratres as effective as Pärt’s similar Cantus; what did work in this performance was the richness of the string sonority under Petrenko’s cool direction.