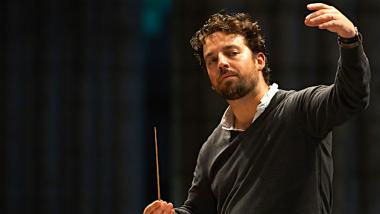 Thursday’s San Francisco Symphony program was originally to be Debussy-themed. But when conductor James Gaffigan stepped in last minute for Michael Tilson Thomas, who withdrew due to illness, the programming took an eclectic turn.

Gaffigan was associate conductor of SFS for three years when he was in his late 20s (which, for conductors, is exceedingly young); he’s now the chief conductor of the Lucerne Symphony Orchestra.

Under his direction, the outlasting Debussy work — La Mer — was magnificent. Fineness and strenuousness balanced beautifully, the instrumental balance itself supporting every gesture. The final effect was like that of a pointillist painting — impressive whether seen from a distance or up close, at the level of a speck.

During concertos, in fact, orchestral forces are often thinned out, the better to support (and stay out of the way of) the soloist. In György Ligeti’s Piano Concerto, though, a reduced orchestra of principal players form solo consorts that imbue the music with additional meaning. On Thursday, pianist Pierre-Laurent Aimard was a joy to watch, but the score — whose sophisticated textures seems influenced by the orchestral concertos of Béla Bartók and Witold Lutosławski — encourages a proliferation of focal points.

On the first (second, third) listen, much of the concerto is bewildering. The first movement’s rhythms, simple against compound, so closely oppose each other that it sounds off — wrong, but so wrong, it’s right.

It’s extraordinarily complex music that, evidently, was personally significant for Ligeti, who described the work as presenting his artistic credo. Those are high stakes, and, after the initial premiere in 1986, it took an additional two movements — and two years — for him to completely express the work.

And yet it’s not difficult music to experience. The Scherzo is dizzying, yet the triple meter remains an organizing comfort, the roiling piano lines like waves, familiar in a sort of Debussyan way. References like these abound, and the sounds are often classically gorgeous; the way a single note hangs over from the first movement into the next, for example, recalls Mendelssohn.

Sounds less familiar to me (like the chromatic harmonica) are exciting and stir emotion. The slow movement’s bald gestures, played at extreme ends of the range, create an abstraction of shifting planes. Rather than mounting to some height, sounds occur only in their corners — yet the feeling of searching is undeniable.

One late addition to Thursday’s program was Something for the Dark, a recent work by American composer Sarah Kirkland Snider. The piece, commissioned and premiered by the Detroit Symphony, is an evocative city portrait that contrasts heroism (sweeping gestures, played in noble flats) with ambivalence. The sound world, though, is always sumptuous. It’s unusual for SFS to play two more-or-less contemporary works in the same evening, but especially when the sensibilities are so different, newer works add a good deal of interest for me.

A choice quote from Bernard Shaw: “Who wants to hear Samson et Dalila? I respectfully suggest, Nobody.”

Ouch. It’s true that, of Camille Saint-Saëns’s scandalously sumptuous biblical opera, the “Bacchanale” is particularly obvious. It’s also true that Shaw’s judgment didn’t quite extend to the “Bacchanale” — he left before the third act. Anyhow, it’s fun to hear this movement, when played well, about once in a blue moon, and there were plenty of smiles in the house as well as on the stage.

The close connection between violinist and conductor made for an electrifying concerto performance.

Aimard on Boulez: A Tribute on the Composer's 90th

Pierre-Laurent the pianist celebrates his long-time association with Pierre the composer.

Pierre-Laurent Aimard recital offered a diverse program, challenging the audience to marvel as his seamless playing, even between the notes.