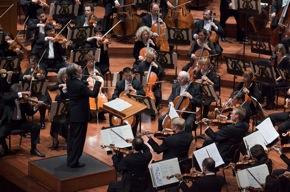 The juxtaposition of names is as incongruous as the musical result. Schoenberg, obsessed with maintaining the superiority of German music, considered himself an heir to Brahms. It’s difficult for humbler ears to hear the connection. Although Schoenberg insisted that he was orchestrating in Brahms’ spirit, and abjured any hint of his own atonal interests (fading, in fact, by the time he did this work in 1937), it sounds nothing like Brahms, and not much like Schoenberg’s own orchestral works, either.

While the melodies and harmonies are those of Brahms, the disposition of instruments is utterly unlike him. Schoenberg aimed at clarity, making the inner parts distinctly audible, the antithesis of Brahms’ mellow, blended sound. The crunchiness of piano-and-strings was totally gone; in its place were smooth-surfaced blocks of primary colors. Doublings of instruments from different choirs were rare; mostly similar instruments played together, as in the unexpected opening for three clarinets. As the work went on, the orchestration kept getting stranger, culminating in much percussion punctuation to the finale’s lively rondo theme.

For a listener who knows the Brahms quartet but had never heard the Schoenberg orchestration before, this was a deeply disconcerting experience. Had the quartet been played backward, it would not have been more disorienting. Judged on its own merits, though, it was a delightful symphony of a timeless quality: not quite 19th-century, nor yet 20th-century either. Schoenberg thoroughly reimagined his source work, and I could wish he’d taken the time to do more like it.

The Schoenberg orchestration [of a Brahms quartet] ... was a deeply disconcerting experience.

Naturally enough, the San Francisco Symphony musicians thrived on this music. Every part of the orchestra had numerous chances to show its worth, and they all came through with full force and strong flavor. Schoenberg’s big flat colors were never bland. With the weight of the orchestra behind him, MTT took the first movement far more slowly than any chamber performance would be likely to, and sped up gently in the succeeding movements.

The more “normal” work on the program was an even more extraordinary performance of something all-Brahms, his Violin Concerto in D Major. When this work was new, the great violinist Sarasate declined to perform it, saying he didn’t want to stand there, violin in hand, while the oboe played the only real tune in the piece. The great violinist Gil Shaham, who played on Wednesday, did not take that attitude. Whenever he was not playing, he stood there, violin in hand, with a rapturous expression on his face, as if he was delighted at his own good fortune to be surrounded by such beautiful music, so excellently played. (And that oboe theme was delivered quite satisfactorily, in a detached rather than legato style, by William Bennett.)

When Shaham put the violin to his shoulder, his attention turned intensely toward his own work. He is not a commanding concerto soloist, and he cleverly applies his modesty to his own advantage. Rather than wresting attention to himself, he beguiles his listeners. He played quiet passages with a soft lyricism that often faded away at the ends, forcing the audience to follow him closely to hear him at all. He delivered the music with such piercing refinement that it was a pleasure to pay rapt attention.

[Shaham] delivered the music with such piercing refinement that it was a pleasure to pay rapt attention.

In louder parts, Shaham aimed for color and character. In scalar passages, each note seemed to have a distinct flavor. He placed particular emphasis on the double stops. I had not realized quite how many of them there are in this concerto. Shaham would not let them be overlooked, as he melded the diverse sound from his strings into firm harmony. Throughout his solos, he was in full lyrical cooperation with the orchestra, as MTT directed a graceful performance fully in keeping with Shaham’s aesthetic. These artists were what Oscar Wilde said artists should be: the makers of beautiful things.

As with the Schubert concert two weeks ago, this one had a somewhat mismatched piece hitched to the beginning: the Prelude to Act 3 of Wagner’s Lohengrin. Leaving aside any question of whether Wagner and Brahms go together like oil and water, this Prelude, which covers Elsa and Lohengrin’s wedding, is one of Wagner’s most grandiose and celebratory — though fine in itself, not the best introduction to a gentle rather than fiery rendition of the Brahms concerto. The softer and more spiritual Prelude to Act 1 of the same opera would have fit the mood better.

Nor did the performance quite match the standards of the other works. The violins were too shrill at the climaxes, and some of the winds could have used more rehearsal. The brass, though, was as full and rich as Wagner could have desired.