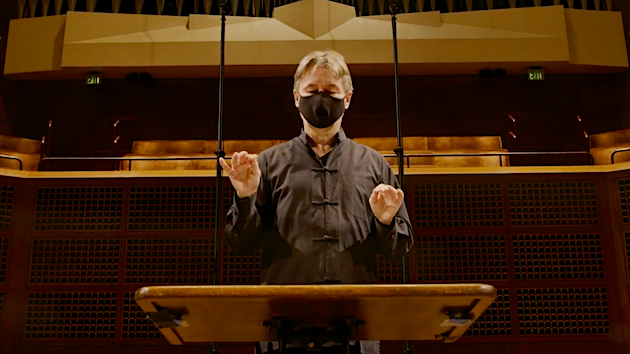 Everyone’s panting to strike up the band and get music back in their lives. In the Bay Area and well beyond, few things have been more keenly missed in pandemic times than the San Francisco Symphony, especially with a new music director, Esa-Pekka Salonen, poised to take the baton and lead a new parade.

So it was with no small sense of anticipation that audiences awaited “Throughline — From Hall to Home,” an ambitious streaming concert that premiered Nov. 14, online and on KQED television, and remains available for free on the Symphony’s website.

Comprising five works (or excerpts), intercut with commentary by Salonen, administrators, board members, and musicians, the program achieves what so many digital-platform performances do not. It entertains, absorbs, and engages the listener/viewer in a well-judged work of technical and artistic prowess. By turns exciting, engrossing, whimsical — and yes, sometimes a little too pleased with itself — the hour-long concert dives head-first into the expansive possibilities of music on screen.

It’s a choice irony that “Throughline” concocts some of the contact high of live music by taking a highly mediated approach. This lands the experience about as far as can be from the studied conventions of a filmed concert.

Rather than trying to camouflage the recorded and edited nature of the enterprise, the program puts it on full, dynamic display. The camera swoops over the San Francisco skyline and burrows into a sylvan forest in Finland. The screen image fractures into shards to capture multiple musicians at once, like a piece of kinetic Cubist art. A hip-hop number sends viewers roaming the graffiti-festooned streets of Oakland and elsewhere.

Even the shots of empty seats in Davies Hall carry a sly but assertive message. No, you’re not here now, the show’s creators affirm, and you may not be for quite some time. But for now, for the next hour, you can become a time and space traveler, in sound and sight, to an imagined realm of music both globally envisioned and confidingly intimate. You’re right here, in other words, primed to be sent aloft.

None of this would work if the musical choices were casually considered or the execution slapdash.“Throughline” hit the right mark on both counts.

By opening with the shimmering, gamelan circuitry of Ellen Reid’s Fear/Release for percussion quartet and following it with the percolating string whirl of the “Shaking and Trembling” section from John Adams’s Shaker Loops, Salonen and his multifaceted team establish fractal patterns and creative repetition as a thematic musical throughline. It emerges in very different garb in the hip-hop lyrics and heart-beat rhythmic thud of Kev Choice’s Movements. Then, in the eponymous world premiere capper, Nico Muhly’s 19-minute Throughline pays the most extensive dividends.

As for the technical aspects, most everything feels apt and assured. The cuts from filmic San Francisco exterior shots to Davies Hall and back out again are fluid joins. Close-ups of masked and socially distanced musicians enact the principle that life can go on and flourish while performers and listeners alike take prudent and mutually protective measures. There are telling subtle touches, too, such as color shots of the musicians in Adams’ Shaker excerpt briefly flipping into sepia-toned black-and-white, like flashbacks to the bygone American faith community the piece enshrines.

By all rights, Throughline ought to be a pastiche, an improbable anthology. But it’s not. A motivic pulse, sometimes overt and sometimes more subliminal, binds the 13 movements together. There’s some active weather early on, when a tender, almost Coplandesque passage is threatened by the timpani’s rumbling thunder, which in turn sets off a woodwind squall.

Carol Reilly’s jazzy, burbling riff, with AI (artificial intelligence) as her composition partner and a scrawl of computer code running across the screen, gives computer music a good name. A Bach chorale is quoted and gently bent. Bullock takes command in a transfixing song that offers “the search of a soul from sky to sky.” (The closed-caption option is another plus for remote audiences.)

Both Muhly’s composition and “Throughline” as a whole contain many more felicities, correspondences, and connections. Aside from the opening movement of Beethoven’s String Quartet in F minor, Op. 95, crisply performed by Symphony musicians and shot in a conventional interior mode (albeit in dramatically heightened light), most everything else is enhanced by the adept but rarely overbearing visual language. Salonen’s wondrous walk through the Finnish woodland is an endearing coda of lightly magical thinking.

One thing that does wear thin are the spoken testimonials to the Symphony’s endurance in tough times. We know. That’s why we showed up online to hear what can happen in a musical language.

It’s become a commonplace to speculate on what has been changed forever by the pandemic. We won’t know that until it’s over, and probably not for a long time after the masks are off and “normal” life resumes. But it’s hard not to imagine some of the innovations and accomplishments of “Throughline” carrying forward.

Salonen signaled his impulse to re-imagine the Symphony’s future long before Covid arrived. Now that he’s made a very intriguing experiment, there’s fresh reason to gaze into the future.

The salvage job on the virus-ravaged fall season includes some televised concerts.

Brian Baumbusch, Lisa Bielawa, and Danny Clay hope that their musical reflections during quarantine will resonate.

The Jigsaw Puzzle of Putting an Orchestra Onstage During a Pandemic

As orchestras return to the stage and recording studio it’s far from business as usual.