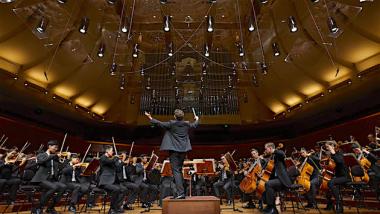 S.F. Symphony’s Youth Orchestra Is Ready for the World Stage

San Francisco Symphony Youth Orchestra is taking off on another big trip — their 11th international tour — to Europe. Big enough, in fact, to merit two bon voyage concerts, a month apart, before leaving in June.

The first one on May 19 was an unqualified success, with Wattis Foundation Music Director Christian Reif conducting Mendelssohn’s Fingal’s Cave Overture, Nathaniel Stookey’s Mahlerwerk, and Mahler’s Symphony No. 1 in D major.

On Sunday, Reif and the young musicians had a marvelous surprise for those waiting for the large gestures of Mahlerwerk and the Mahler proper by way of a deeply felt, gorgeous performance of Fingal’s Cave, Mendelssohn’s orchestral scene describing the forlorn, rugged beauty of the Hebrides. It was a little jewel on the way to Big Bang(s) that followed. As another outsized composer, Richard Wagner, said of Mendelssohn’s echt-Romantic work, it is “one of the most beautiful pieces we possess.”

And so it was, as played by the Youth Orchestra, co-concertmaster Isaac Park in the first chair, excellent ensemble playing by all, with notable solo work by William Poulter (flute), Sebastian Pereschica (oboe), and Tian Qin and Yijin Wang (clarinet).

For anyone faithfully following the Youth Orchestra since its formation in 1981, with Jahja Ling as its first music director, it was no surprise that the young musicians met the mighty — nay, Titanic — challenge of Mahler’s huge Symphony No. 1. .

The orchestra’s response to Reif’s superb interpretation that melded big with beautiful throughout the work’s hour-long expanse was thrilling. Not only did Reif hold the fortissimos of the 100-piece orchestra in check, he somehow managed to avoid those noisy crescendoes and explosions that are the bane of many orchestras. Musical power should not be a matter of decibels out of control.

Mahlerwerk, between the Mendelssohn and the Mahler proper, is well familiar to the Youth Orchestra, written by one of its distinguished alumni, Nathaniel Stookey, the work played by SFSYO soon after its 2011 premiere in Hamburg.

As Niels Swinkels wrote in his 2013 review of the Youth Orchestra:

The title Mahlerwerk, or rather Mahl/Er/Werk, is a play on the composer’s name, and the German word Mahlwerk (mill, grinder), which more or less describes the compositional process that Stookey uses here; he breaks Mahler’s compositions down into small chunks, but leaves them in the original key, tempo, and orchestration.

When reworked, some of these fragments preserve their original ‘Mahler-ish’ mood and character, but others are put together in such a way that they create a completely new atmosphere or rhythm.

With a brief introduction from the stage by Stookey, the work received an enthusiastic, dedicated performance from Reif and the orchestra, the adjectives perhaps not descriptive of (still formidable) general audience reaction to this challenging piece.

The next “dress-rehearsal” concert, on June 16 — just a week before the tour begins in Denmark (it ends with a July 4 performance in Budapest) — will have the program scheduled for most of the European concerts: Detlev Glanert’s Prelude No. 1, from Three American Preludes, the Tchaikovsky Violin Concerto, and “selections” from the Mahler No. 1 — only at the June 16 Davies Hall event, but the entire work will be played on tour.

The Youth Orchestra will give six concerts during its upcoming 17-day tour: in Denmark’s Odense Koncerthus, the Tivoli Concert Hall in Copenhagen, the Elbphilharmonie in Hamburg, the Philharmonie in Berlin, Musikverein in Vienna, and the Margaret Island open-air stage in Budapest.

German-born, Juilliard-educated Reif, who just turned 30 on May 13, says of the tour:

The young musicians of this orchestra are boldly exploring and expanding their awareness of the world, and these are themes which Mahler also captured in his First Symphony. It’s truly exhilarating to hear them pour their enthusiasm and curiosity into this masterpiece.”

Performing in these important venues and visiting these wonderful cities together creates experiences for the young musicians and myself that we will cherish all our lives. For most of them, this

is their first trip to Europe, and I know that it will be life changing to walk the streets and breathe the air in places that were important in the lives of legendary composers themselves.

Showing the musicians of the Youth Orchestra my favorite spots and exploring the history and culture of these countries will be a culmination of our three years working together. I can’t wait to make music with the SFS/YO and to share their excellence with the European audiences.

Age range in the Youth Orchestra is 12 to 21. The tuition-free SFSYO tours internationally every three to four years. Because the average tenure of a Youth Orchestra musician is three to four years, this allows most members to experience the process of touring, ensemble building, and the once-in-a-lifetime experience of making music in some of the world’s most venerable concert halls.

A scholarship fund ensures that every student is able to participate. The SFSYO embarked on its first European tour in 1986, where it was awarded the world’s highest honor for a youth ensemble, the City of Vienna Prize, at the 15th International Youth and Music Festival.

The orchestra made a tour of Asia in 1989 and has since made a total of nine European tours with performances at some of the most prestigious venues including the Berlin Philharmonie, the Mariinsky in St. Petersburg, the Amsterdam Concertgebouw, and Prague’s Smetana Hall.

The SFSYO’s tour in 2012 won them the ASCAP Award for Adventurous Programming of American music on foreign tours. Their performance of Mahler’s Symphony No. 1 at the Berlin Philharmonie was recorded live and released in 2013 on SFSMedia, their sixth recording.

The orchestra is performing two bon voyage concerts before heading off on an 18-day tour around Europe.