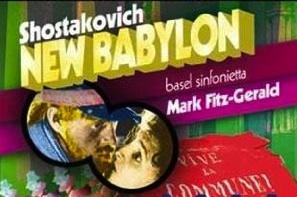 The problem with being a fan of the music of dead composers is that they’re not writing any more of it. Take Dmitri Shostakovich. He left us 15 each of string quartets and symphonies, and much other music; isn’t that enough? Not for Shostakovich fans.

Fortunately, there’s a hidden trove of vast, mostly unexplored acres of Shostakovich: his film music. Shostakovich scored more than 30 Soviet movies, covering the entire span of his creative career. While he did recycle some ideas, he rarely reworked his movie music into full-scale concert pieces. And, since old Soviet movies are rarely seen in the West, and many of the scores and parts have long been buried in archives, a vast amount of Shostakovich is ripe for rediscovery.

In recent years, many of these scores have begun to be issued on CD. The two-disc New Babylon is the complete hour-and-a-half instrumental music to a 1929 Soviet movie about the Paris Commune of 1871, an abortive revolutionary government existing briefly in the confusion after the Franco-Prussian War. The movie was silent, and the music was intended for live performance by a pit band during screenings — a form of music-making with which Shostakovich was well familiar, as he’d himself worked in the grinding job of a silent-movie piano accompanist.

Unfortunately, the music had to be hastily reworked at the last minute when the movie was chopped up by the censors, and live performances turned disastrous as the musicians got out of synchronization with the screening. The music was shelved, and only dribbled out in bits and pieces after the composer’s death. For this recording, conductor Mark Fitz-Gerald has examined all the manuscript material and, he says, finally put the complete score back together for the first time.

As this is 1929, this music is early Shostakovich. Before Stalin’s regime turned its deadly gaze firmly on the arts and imposed “socialist realism” in the 1930s, modernism ran free in the revolutionary spirit of the 1917 Soviet revolution itself (and the 1871 Commune before it). Or so the artists reasonably thought, which is why they were so bewildered when their own revolutionary leaders made them stop a few years later. Shostakovich never recovered from the shock of being denounced in 1936, and this affected all his subsequent music, so it’s quite intriguing to return to the “glad confident morning” of his earlier years.

The serious concert pieces Shostakovich was writing at this time were often edgily experimental, even proto-aleatoric, yet they also had a populist side. For New Babylon, Shostakovich mostly stuck to the populist, with a few experimental touches. Movie audiences of the time, though, were expecting the kind of lush romantic scores that soon came to typify Hollywood, and didn’t know what to make of Shostakovich’s jumpy, angular cabaret music and tragic turns. With our greater familiarity with his other music, with Stravinsky (often an influence here) and other composers of the day, and with 1920s jazz and later cabaret music on Broadway and elsewhere, we today have a greater context to enjoy this score in.

The context I hear it in is largely that of Shostakovich’s other symphonies and quartets. The first two of New Babylon’s eight “acts,” or “reels,” are the most optimistic in character and possess the bright, cheeky quality he’d already displayed in his First Symphony. As the music becomes darker in succeeding sections, it begins to sound more like the Third, written in the same year as the score, and the Fourth, the epic work Shostakovich was composing at the time of his denouncement. Quotations of La Marseillaise or from Offenbach in several places find a startling echo in Shostakovich’s last symphony, the 15th, whose first movement features an enigmatic quotation from Rossini. The pit-band orchestration, dominated by brass and winds with only five solo strings, increases the resemblance to the 15th’s solo violin passages. While Offenbach is obviously in the movie as the vernacular music of the setting, nobody has ever explained what Rossini is doing in the 15th. Yet, somehow, listening to this causes the other piece to make sense.

As the movie music goes on, it grows more dramatic and varied in character, jumping back and forth among moods. In the sixth section, the action stops entirely to allow a piano to play a gentle song by Tchaikovsky (which a character does in the movie), and then jumps back in where it left off. While some of the varied moments are cheerful or wistful, others grimace, and most are tense and serious, even dark or tragic, with brutal staccato chords, metallic shimmers, and taut ostinatos. Here the resemblance is to the heroic picture-painting symphonies of Shostakovich’s middle period, especially the Eighth and 11th. The darkest moments, around the movie’s depiction of firing squads and grave digging, inevitably gesture to his “death” symphony, the 14th. In a few spots, too, the strings take over to play light waltz music as if the rest of the score did not exist; here, the echo of the more nostalgic moments of Shostakovich’s string quartets is very strong.

So there’s something for everyone in this music. If you don’t like the mood now, it’ll change in the next minute. Throughout, Shostakovich’s orchestration is brilliant, and the Basel Sinfonietta plays it all under Fitz-Gerald’s sure direction with unflagging dedication and precision, with an ear to the crisp bite and unpredictable moodiness that the composer obviously wants. Blaring trumpets, wailing clarinet, caustic violin, a large battery of sometimes surprising percussion — and their startling opposites in coy gentleness from the same instruments — all stand out, while mixing into a coherent ensemble. It’s hard not to sense that Shostakovich’s honest original voice is speaking here, and it’s easy to imagine the music’s gradual shift from light into darkness as prefiguring the shape of the composer’s impending career.