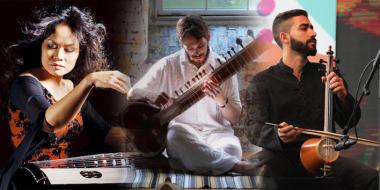 Silicon Valley Music Festival Breaks out of the Box

The annual Silicon Valley Music Festival’s sponsor calls itself Chamber Music Silicon Valley but its horizons over the years have expanded beyond an ordinary chamber repertoire. Inspired, perhaps, by CMSV’s traversal of Bach’s complete Brandenburg Concertos in a single concert last January, this year’s festival last week focused on big-ensemble works, with as many as 20 players on stage at a time.

The focus was also multicultural. The featured ensemble was a new multinational group called Common Sounds, whose members played various Western and non-Western wind, percussion, plectra, and a few bowed string instruments. They were joined, when a sizable company of Western strings was needed, by members of the San Jose Chamber Orchestra, sometimes conducted by its music director, Barbara Day Turner. (At least one or two of CMSV’s Emerging Artist Fellows also played, but they were mostly heard at noon concerts on the previous days, which I missed.)

A good example of the cultural and artistic potpourri occurred in Saturday’s final concert with the presence, between larger works, of two songs by the banjo-playing American folk singer-songwriter Taylor Ackley, accompanied by a large band of Common Sounds players, with notable solos from French horn (Amr Selim, from Egypt), sitar (Tomek Regulski), and the Iranian bowed string instrument the kamancheh (Farzin Dehghan).

More folk music of various cultures was heard on Friday. (I missed the festival’s first concert on Thursday.) Flutist Ray Furuta, the festival’s artistic director, and harpist Bridget Kibbey gave pointed and energetic performances of Kibbey’s arrangements of Hungarian folk songs collected by Béla Bartók. They followed this with peacefully slow and breathy readings of two Japanese lullabies, accompanied by a larger ensemble. There was also a lively Yiddish song salted in to the program.

The big formal compositions of the evening also reflected cultural variety. They all ran about 10–15 minutes but seemed, in their hypnotic entrancements, much longer. Vân-Ánh Võ sang a haunting lament of her own composition in honor of Vietnamese boat refugees, accompanying herself on traditional Vietnamese zither and xylophone, the latter in the shape of a twisting ladder. Night at the Caravanserai, by the 20th-century Egyptian popular composer Mohammed Abdel Wahab, was a lively rondo featuring many solos over held riffs, and rendered livelier and more multicultural, as well as extramusical, by the presence (audible as well as visible) of a flamenco dancer.

The best and most hypnotic work of the evening was Tarang (Currents) by Sandeep Das, best known as the tabla player for the Silk Road Ensemble. Over held strings, an unusual and striking combination of Furuta’s flute and Selim’s horn played a stealthy repeating melody that in turn served as the grounding for cadenzas from hand cymbals and other percussion. At other times, Selim performed elaborate cadenzas of his own, with expressive and ghostly wailing from his horn of a kind I’d never heard from the instrument before. This ranked high as a striking new-music performance.

The closest thing to a conventional modern-classical piece on Friday’s program was Ki-Iro (Yellow) by Andy Akiho, a reassuringly postmodernist composition consisting of a buildup of layered riffs over a vibraphone base, with a gradual increase of dissonance. In the clamoring context of the concert, it didn’t feel out of place.

All of these works probably had their instrumentation adjusted to fit the available forces. I know that was true of the two big pieces on Saturday’s program. The ensemble played several movements from Osvaldo Golijov’s song cycle Ayre. This is a madly exotic composition perfectly suited for the Common Sounds style, even if the choice of mostly slower movements, and the substitution of instrumental solos for a singer, did tame it down a bit. There was more solo work on horn from Selim, who really got a workout at this festival, though this time the most striking performer was Võ. She gave her solos here on the đàn bầu, a one-stringed zither with an eerie tone and adjustable pitch whose sound Furuta compared to a theremin.

Like Wahab’s work on Friday, Ayre had a dance component. The last movement was accompanied by three young women in what looked like muslin dresses and leggings, who performed Sufi whirling. This consisted mostly of hypnotically spinning in place at a constant speed for longer than I’d have thought the inner ear could stand.

The remaining large work on Saturday was the suite from Aaron Copland’s Appalachian Spring. Copland originally wrote this for a 13-instrument chamber ensemble. Here we had 12 performers with a few adjustments, notably Kibbey’s harp instead of piano, and oboe (Kendra Hawley) for bassoon. These changes gave the ensemble a light, punchy sound. The performance, as with the Golijov, was at its best in the slower portions of the score, emphasizing harmonic peace over vigor.

The festival is noted for its frequently shifting and unusual choice of small venues. This year’s main concerts were at the Rotary Summit Center, a hotel-style ballroom improbably located on the top of a seven-story parking garage in downtown San Jose. The musicians played on a low platform of the kind typical of hotel ballrooms. The low ceiling and small size of the room in comparison to the size of the ensemble didn’t prevent the acoustics from being diffuse enough to need amplification. This gave an echoing effect to some of the lighter-toned instruments. If the venue wasn’t ideal, the festival’s concept and repertoire were invigorating, and the performances arresting and astonishing.

A century-old opera from a classic story, gets a makeover in a collaboration between the Silk Road Ensemble, vocalist Alim Qasimov, and the Mark Morris Dance Group.