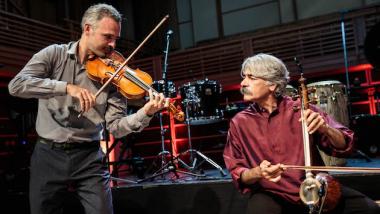 Silkroad has contracted its name since its founding as the Silk Road Project in 1998 by cellist Yo-Yo Ma, but it has expanded the scope of its presentations, as evidenced in the current Heroes Take Their Stands. This awe-inspiring show, created by Iranian-born sociologist and author Ahmad Sadri, brought to Cal Performances’s Zellerbach Hall last Friday a hard-to-define mix of instrumental and vocal music, dance, lighting, projections, and electronic effects, associated with what the program notes describe as “mythology, folklore, history, religion, drama, epic, and oratory.” The five parts of the uninterrupted 90-minute extravaganza, according to Sadri’s notes, were intended to convey “enduring inspiration for us all” about “the sublime essence and grandeur of the heroic gesture [which] cannot be truly captured in words alone.”

Despite the program notes and the projected text which preceded each part, it would be tempting to just sit back and not try to make sense of it all. But with the assignment of writing a review, I took note of the purpose of Pauchi Sasaki, composer of the opening Elektra, and Nomi Sasaki, its co-director and scriptwriter (and sister of the composer), to approach this 5th-century BCE Greek tragedy as an exploration of its protagonist’s “subjectivity and interior conflict” as “deeply resonant with today’s struggles with social media, truthfulness, and independent thought.”

Curiously, the program booklet failed to identify the musicians and instruments involved in all of the sections of the show, but some of those appearing in Elektra, including what amounted to a string quartet and Kayhan Kalhor, virtuoso on the kamancheh, a Persian spike fiddle, were familiar from previous Silkroad presentations. The international instrumentation, a hallmark of the ensemble, also featured a non-Western trumpet (which may have been a Chinese suona, and tended to overpower the strings), Indian tabla drums, and Japanese taiko drums, working interesting polyrhythms. The fascinating projections included what looked like a human poised in a tundra landscape, and there were images and sounds of surging water. But the sum of this wasn’t particularly Greek to me, and I couldn’t really discern the musical structure of the piece or the significance of its conclusion.

June Snow, composed by Kaoru Watanabe in conceptual collaboration with creative director Wu Man (who also performed on pipa, a Chinese lute, in this and other portions of the program), was based on a “classic subject of Chinese opera,” dating back to the 13th century depicting another female hero. There were projections of Chinese calligraphy, and the pipa was joined by the sheng, a round Chinese reed instrument with multiple pipes, tabla, and both end-blown and transverse flutes. Again, I found it tough to follow both the story and the shape of the musical composition.

Arjuna’s Revelation, based on of several heroic tales from the 2nd century BCE Hindu Bhagavad Gita, showcased both dynamic tabla virtuoso Sandeep Das and Aparna Ramaswamy, a practitioner of Bharatanatyam, a folk dance from South India. Das also vocalized in the staccato form called teental, and Ramaswamy boasted exquisite balance and alluring expression, though I couldn’t testify to the tale she might have been trying to tell. The composition, pleasantly Scheherazade-like, was by violinist and charter Silkroad member Colin Jacobsen.

Martin Luther King’s 1955 speech at the Holt Street Baptist Church in Montgomery, Alabama, inspired jazz pianist Jason Moran’s Moderato 400. Perhaps the most down-to-earth of the evening’s compositions and presentations, the piece made affecting use of strings, with a surprisingly bluesy turn by the sheng player.

The Prince of Sorrows, the closing offering, was both the most spectacular and the most effective in storytelling, about a 10th-century Persian prince’s persistence in moral, spiritual, and humanitarian rightness. It was composed by kamancheh player Kalhor, whose recorded musical ensemble included Persian tombak drums and nay, a transverse flute, as well as vocals. Kalhor was partnered by fellow Iranian expatriate filmmaker and visual artist Hamid Rahmanian, who deployed projections of enlarged, floating Persian calligraphy, as well as dazzlingly colored illustrations which seemed to reach the audience in three or four dimensions.

Correction: The original version of this article said that Pauchi and Nomi Sasaki were not related. In fact, they are sisters.

The multinational group offers the local premiere of a new work for Cal Performances on May 3.