“Undersong,” says pianist Simone Dinnerstein, is an archaic term for a song with a refrain. In her new Orange Mountain Music CD bearing that title, she offers a musical meditation on the notion, in a program that ranges from Couperin to Philip Glass, Schumann to Satie.

In a sense the terrain for such a project could be almost limitlessly large. Virtually any piece of music that reprises one section later on could be said to have a refrain. Baroque opera, to cite one example, would all but evaporate without the arias’ ABA structure.

But Dinnerstein, who first came to prominence 15 years ago with a heralded recording of Bach’s Goldberg Variations (a work she will play Jan. 29 at Carmel’s Sunset Center), is up to a lot more than demonstrating a self-evident point. In performances that are by turns daringly spare and dramatic, meditative and mild-mannered to a fault, she invites a listener to ponder what it means to hear something again, informed, enriched, or unchanged, by what separates the original utterance and its refrain.

Dinnerstein’s tempos, in general, are patient and deliberate. Instead of quick-silvering through Schumann’s familiar Arabesque, the pianist gives every harmony, grace note and dotted rhythm its due, as if all the details deserved equal weight and consideration. The dynamics shifts are modest. Each time the first subject recurs, it does so with a reaffirming placidity and calm. The result is soothing and contemplative, like watching water in moonlight.

Dinnerstein takes a different tack with Glass’s coyly named Mad Rush, with its double set of refrains, one fast and one hypnotically slow. Here, instead of settling back into familiar grooves, the performer makes each return a fresh find, enlivening a piece that might otherwise seem mechanically structured. The first return of the torrenting “rush” is lightly frilled with a high, fugue-like descant. A third refrain feels more urgent. The slower sections, too, evolve, from a steady tread to dreamy musing on the spatial quality of Glass’ music.

Schumann’s wonderfully characterized Kreisleriana is Undersong’s showy and richly satisfying centerpiece. Through each of the work’s eight sections, Dinnerstein uncovers something fresh and revivifying to say, now full of dramatic fervor, now quizzically bemused, now pensive. Inspired by an E.T. A. Hoffman, character, the piece is full of internal echoes and reflections. As themes recur and develop, Dinnerstein creates a novelistic complexity.

In a splendid account of the second section, she searches out the inner voices and chromatic convergences. The fifth section skitters and shimmers. The sixth all but deconstructs itself before rising from the ashes to revitalize what came before. If some of the interpretations border on the eccentric and mannered, a sense of fresh exploration prevails from start to finish

Not everything pays off. Satie’s Gnossienne No. 3 drones by at such a ponderous, uninflected pace that none of the composer’s pseudo-serious wit comes through. Couperin’s Les Barricades Mysterieuses, performed in a monochrome reading at the beginning of the album and them again at the end in a kind of meta-refrain, gains little in the repetition.

That composer’s Tic Toc Choc, by happy contrast, trips by with a chittering, plucked sound, as if Dinnerstein had magically transformed the piano into a harpsichord. Like her expansive performance of Kreisleriana, this precisely cut little gem merits return visits.

Every detail of the performances elicited the underlying spirit of these Baroque masterworks.

When lauded strangeness becomes vastly public, it may herald a change of fashion. Such seem to be Simone Dinnerstein’s Bach interpretations, which bring elements of romanticism back into baroque performance practice. Bach: A Strange Beauty is will not disappoint her new-found fans, nor will it convince her detractors.

Ranging from Bach to Copland to Webern, pianist Simone Dinnerstein’s April 24 recital at Herbst Theatre looked at first glance like a model of eclecticism. In fact, it was a tightly and cannily structured program, with variations as the organizing principle.

Pianist Simone Dinnerstein: Back to Bach, Forward to Pop

Pianist Simone Dinnerstein discusses her penchant for performing Bach, which she has played since a child, and comparing her style to that of other interpreters. 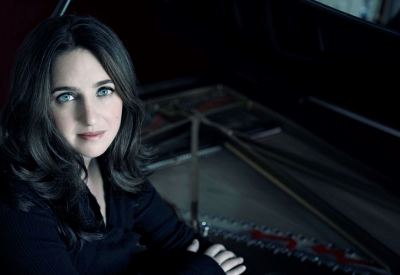