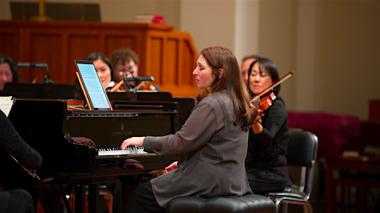 Simone Dinnerstein led the New Century Chamber Orchestra in an immaculate performance of keyboard concertos on Saturday night. Dinnerstein shone in the all-Bach program in her first series of concerts as the chamber orchestra’s artist-in-residence. The pianist initially gained prominence upon the success of her self-financed recording of J. S. Bach’s Goldberg Variations in 2007. She has since released four further albums that feature the music of Bach either prominently or exclusively, so it is safe to say that she was in her element last night.

Saturday’s concert at the Herbst Theatre was one of a series this past week around the Bay Area, and included Bach’s Keyboard Concertos in E Major, BWV 1053, F Minor, BWV 1056, and D Minor, BWV 1052. Distinguished flutist Christina Jennings and New Century concertmaster Robin Mayforth joined Dinnerstein as soloists for the finale, Brandenburg Concerto No. 5 in D Major, BWV 1050. The immense program served as a testament to Dinnerstein’s renown and precision as a Bach interpreter, and the New Century Chamber Orchestra provided commendable support.

As Dinnerstein mentioned before the second half, each concerto develops upon different sounds, colors, and intentions. Given that the concerto was a relatively modern invention in Bach’s time, his musical ideas were allowed plenty of flexibility within the form. The concertos, as such, are markedly different.

The first movement of the E Major concerto begins with the orchestra and piano as part of a team, without much prominence given to the role of the soloist. Later, the reverse approach was applied in the Brandenburg, which features an unexpected extended cadenza for the pianist. This compositional decision was unprecedented and revolutionary in the Baroque era, as the keyboard—or harpsichord, in the Brandenburg’s case—had previously been relegated to the accompaniment. Featuring a virtuosic keyboard part as a soloist in conversation alongside the flute and violin marked the beginning of a massive shift in how the instrument would be treated by future composers.

The emotional heart of the program lay inevitably in the gentle, slow sections. Following the first concerto, Dinnerstein began playing Ich ruf zu dir, Herr Jesu Christ (I call to You, Lord Jesus Christ), BWV 639, a solo organ chorale transcribed for piano by Ferruccio Busoni in the early 20th century. Her performance of the chorale, and of the slow concerto movements in general, was powerful and enveloped the listener in its purity. She continued without break into the F-minor concerto, a sagacious decision that treated the aforementioned as a thoughtful prelude.

The second movement of the D-minor concerto came across as sensitive and luscious, yet communicating the tension written into the music. Bach drew drew material for this movement from his Cantata 146, Wir müssen durch viel Trübsal in das Reich Gottes eingehen (We must enter God’s kingdom through many tribulations). Although the concerto is performed without the text, the meaning endures, and reminds the listener of the higher power for which Bach composed every single note.

Throughout the intricate fugal fragmentations, soaring melodies, and endlessly elaborate developments, the musicians played superbly. The ornamentation was clean, and the tutti orchestra sections were powerful. Jennings’ particularly sweet flute tone blended easily with a stage full of string instruments, yet rang out clear and sparkling in the hall. The program gave the audience an in-depth look at Bach’s evolution as a composer and his revolutionary impact on a budding genre. To hear it performed by a devotee of Bach such as Simone Dinnerstein and her colleagues was a dream.

A rarely performed Ernest Chausson concerto highlights a concert of gems from the 1890s.

Pianist Simone Dinnerstein: Back to Bach, Forward to Pop