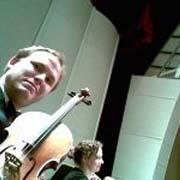 A concert by Cadenza, the former Santa Cruz Chamber Orchestra, is like taking a drink from a mountain spring: cool, clear, and refreshing — though more refreshing, in truth, than thirst-quenching. Saturday’s concert at Holy Cross Church lasted just over an hour, intermission included. When it ended, soon after 9 p.m., twilight had not quite finished fading.

In our hour, though, we heard a small feast of somber, yet nevertheless captivating, 20th-century music for soloist and string orchestra, conducted by Cadenza’s music director, Maya Barsacq. The ensemble’s own principal violist, Chad Kaltinger, was the soloist in two short concerted works, Lachrymae by Benjamin Britten and Trauermusik by Paul Hindemith; and the tenor J. Raymond Meyers sang Britten’s song cycle Les Illuminations.

Kaltinger plays in a modest, introspective manner, fittingly for the popular image of a violist. His tone is smooth, clear, highly consistent, and vocally evocative the way that cello soloists are often said to be. This was all gratifyingly appropriate for the first-named Britten work, a series of slow variations on a song by the Renaissance composer John Dowland. The string orchestra was strongly resonant behind him.

Trauermusik has an interesting history. Hindemith, a violist himself, was in England in January 1936 to play his recent viola concerto on the BBC, when, two days before the broadcast, King George V died. The planned work was deemed too jolly for the circumstances, and Hindemith was asked if he had anything else more appropriate with him. He did not, so on a few hours’ notice this eminently practical composer wrote one: a nine-minute mourning concerto in four tiny movements. The result is meditative and rather Bachlike. It was more challenging for the Cadenza performers than Britten’s Lachrymae, which was a bit stop-and-start in its tempo, yet beautiful and satisfying.

In Les Illuminations, Britten set a sequence of almost hallucinatory prose poems by the French symbolist poet Arthur Rimbaud. The program notes alluded learnedly to Britten’s “coming to terms with his own sexuality” in this work. If that seems to invite performances of lurid sensuality — which the work sometimes receives — other approaches can be made to this music. Cadenza’s own Web site provided a link to a cool, unemotional recording by Ian Bostridge. Meyers went a little in that direction, though not nearly so far as Bostridge. His voice, rich and smooth like Kaltinger’s viola, stayed securely on the notes, without elisions or ornamentation. In place of pulsations and sensuousness, he offered the sonorous and languid, with a slight feverishness to the fast runs in “Phrase” and “Marine,” and with slow, elegant, liquid falls on chromatic lines in “Being Beauteous” and “Parade,” as though he were sliding gracefully down a hill of ice.

Meyers’ range lies high — in “Parade” Britten offers higher-pitched alternatives for some of the low notes, and Meyers took them — yet his emphasis on simple lyricism prevented any screeching. In truth, though he was powerful and clear, in Holy Cross’ acoustics he could get overwhelmed by the orchestra, small though it was.

The orchestral performance was strong, deserving at times favorable comparison even to the Berlin Philharmonic on the Bostridge recording. The strings played with a clear, plain articulation, emphasizing the hints in this early piece of the affinity Britten would later find in the work of Shostakovich, whipping almost viciously through animated moments, and turning appropriately strained and weird for the long, held harmonics of “Phrase.” The extended gentle falling lines in “Interlude” gave somewhat more trouble.

Special note deserves to be made of the viola section. Containing only two players, they gave full strength and body to their often-exposed lines. The cellos as a group were less secure. Section leader Judy Roberts gave some fine solos, though, as did Concertmaster Cynthia Baehr.