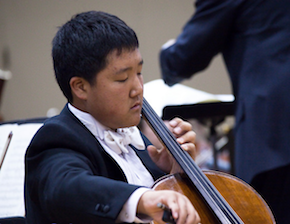 Son of a Gun: Fremont Symphony Still Blazes and Amazes

The city of Fremont is more than a series of traffic jams on the interstate somewhere between Hayward and San José. So the Fremont Symphony Orchestra and its music director, Gregory Van Sudmeier, would like you to know. Therefore, on Sunday they gave a concert at Ohlone College’s Smith Center to celebrate their city, and also the orchestra’s 50th anniversary.

Fifty years goes back to the days when Fremont was a set of separate small towns united only by a then-new municipal government. One of those small towns was Niles, best-known as a home of the silent film industry some 50 years before that, and as an early railroad junction. The concert began by honoring those two bits of history. The railroad was celebrated with Eduard Strauss’ Bahn Frei polka, from 1865, one of the first works to imitate train sounds in musical notes.

The silent film commemoration was a bit more elaborate. After some difficulty getting the projection started, during which Van Sudmeier ad-libbed further opening remarks to pass the time, a screen showed a 1919 silent Western from one of the local studios, The Son-of-a-Gun, staring Gilbert Anderson as “Broncho Billy.” Meanwhile, Jon Mirsalis, dressed as a period saloon pianist, improvised an accompaniment on an upright, beginning with barroom songs and switching to a heavy tremolo when a character pulled out a gun and a title card read, “This is a stick-up.” Then the orchestra joined in with the famous galop from the end of Rossini’s William Tell Overture, though this began while the stickup was still going on and before the more appropriate chase scene started.

Celebration of more current, and more strictly musical, events occupied the rest of the program. The biggest coup of the evening turned out to be getting Connor Kim, still a student at Los Gatos High School, to reprise his performance of Dvořák’s Cello Concerto that had won him the symphony’s young artists’ competition in 2012. What followed was one of the more vigorous and expressively varied performances of this rhapsodic concerto that I’ve heard.

Kim dug in to his cello energetically, with a determined vibrato and a strongly varied set of tones on different strings, which combined to create a striking piquancy in his double stops. He put his full effort into every swell of volume or shift of tempo. Firm dedication to each differing phrase in his part kept the music anchored and compelling.

The orchestra proved itself, as I’ve heard it before, to be one of the finest nonprofessional ensembles in the South Bay, with only a few and the smallest of rough edges. The strings were strong and firm throughout. A forthright, blocky brass section and vivid “popping” winds created a haunting sound that would be ideal for Sibelius.

Connor Kim’s was one of the more vigorous and expressively varied performances of this rhapsodic concerto that I’ve heard.

The orchestra also gave worthwhile results in the closing work, Copland’s Billy the Kid. This was a gamey performance with the same barroom feel as Mirsalis’ piano. A touch of jazz wa-wa to the brass in the Mexican Dance and a clean pennywhistle sound in a flute solo provided the faster sections with a richly invigorating, slightly goofy quality that fit the off-kilter cheer that Copland intended. Only in the gun battle scene did the orchestra step carefully, following Van Sudmeier’s precise time-beating to get this rhythmically labyrinthine section exactly right.

This was the complete ballet score of Billy the Kid — not the suite more commonly played. One of the rarely heard scenes included in this performance was a waltz in which Billy, in jail, dreams of the presence of his sweetheart. This scene was danced on stage by members of the local Diablo Ballet, Rosselyn Ramirez and Derek Sakakura, using the original 1938 choreography by Eugene Loring (who, incidentally, began dancing as a youth in his father’s saloon).

One more item completed the concert, and made for the most delightful and amazing moment of all. I gather that the Symphony makes a regular practice of collecting short compositions from local schoolchildren and playing them at school concerts. This was, though, apparently the first time they’ve played such a collection at a regular subscription concert. These pieces — there were six of them — were by elementary school students. Young composers don’t get much younger than that. The compositions were simple short melodies for piano, some of them even without harmonization, each played first in its original form and then as orchestrated by Emmy-winning film and TV composer Jeff Beal, himself originally a local boy.

Jaunty marches by Garin Jankowski and Aileen Chen, an echo of early Prokofiev by Rahul Swaminathan, a waltz by Irene Geng, and other lyrical slow melodies by Tony Ma and Sasha Tang were all simply constructed in their original piano form, and were nicely enhanced by Beal’s conscientious orchestration, in the common vocabulary of post-American-nationalist film-music style. Beal used his own choice of harmonies, and added counter-melodies and linking themes, bringing out the charm of the young composers’ inventions.

This year, the music was accompanied by brief silent videos, also shot by sixth-graders who were provided with cameras and told to go out and have fun. Some shot static scenes, car rides, or random people, while others staged amusing little skits. The funniest, matched with Sasha Tang’s piece, showed students falling asleep as their teacher lectures to them from a text on the blackboard reading “blah blah blah blah.”