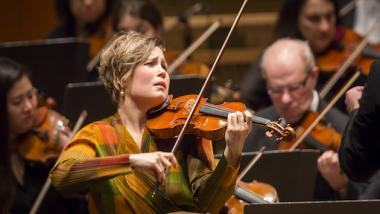 A week after Valentine’s Day, the rose-colored glasses have come off — those, at least, tinting the relationships depicted by the San Francisco Symphony on February 22. The decidedly nonsugary pairings of Romeo and Juliet, in Prokofiev’s ballet suite; and of Scheherazade and her vengeful king Shahryār, in John Adams’s Scheherazade.2 for violin and orchestra, made for a wonderfully dramatic program.

As compiled and conducted by Michael Tilson Thomas, Romeo and Juliet is a comprehensive suite that touches on practically every theme from the four-act ballet score. The fast pace of Wednesday’s performance created a few strange instances of inter-section friction, particularly in the “Folk Dance” movement, but the thorny fight scenes were impeccable, and the brass and percussion deafened magnificently in the interlude.

Another Romeo and Juliet, by Berlioz, inspired Adams’s design of Scheherazade.2 as a “dramatic symphony” rather than a violin concerto, though he wrote the large-scale work for Leila Josefowicz, who was Wednesday’s soloist. Indeed, the orchestral writing is equally virtuosic. A loose narrative adapts the story of One Thousand and One Nights, but, as in both Prokofiev’s and Berlioz’s pieces, the music — perhaps the finest Adams score I’ve heard — speaks for itself.

The orchestral highlights are countless, from the eerily inflectionless string unisons in the first movement to the stinging solo cello notes in the finale. The inner movements, especially, would make Rimsky-Korsakov (whose own Scheherazade is a model of colorful orchestration) proud. In the second movement, “A Long Desire (Love Scene),” throbbing chords, impossibly lush on Wednesday, converge amidst suggestively swirling harp and cimbalom lines. Whips snap in the dissonant and violent third movement, which depicts the trial of Scheherazade by a group of shouting religious zealots. Will she prevail? The bass drum thrums ominously against Josefowicz’s bald solo line — but, in the final moments of the work, the harp’s measured line suggests that Scheherazade, having escaped her tormentors, is walking her own path.

Josefowicz, who performed by memory, outdid her own Grammy-nominated recording. In the strenuous first movement, the soloist rarely rests, but in each passage Josefowicz rose above the din of the full orchestra with seeming ease, even as she controlled her bow’s contact point with razor-like precision. She played sweetly in the romance, and, against the orchestra’s accusatory bursts in the third movement, imbued the Scheherazade character’s squarely logical responses with a calm but assertive demeanor.

Adams’s work plays with the traditional concerto format, in which the heroic soloist, while being musical, must overcome various technical hurdles (for the violin, things like rapid series of octaves or tenths) designed to dazzle the audience. In fact, Adams’s technical vocabulary is virtually the same as that of Romantic-era concertos; there are no new or recently developed extended techniques here. Yet, because each interaction of the solo line with the orchestra seems to reach new expressive heights, there is real drama in Scheherazade.2: of the violinist’s monumental task of standing up to the orchestral forces, and of the character’s plight against her oppressors.

Indeed, the .2 suffix to the piece’s title, Adams quipped on Wednesday, represents a kind of “software update” to the version by Rimsky-Korsakov, whom he described as glossing over the story's darker subtext. In One Thousand and One Nights, Scheherazade ultimately lives — but, as Adams said, “There’s not much to celebrate” in a tale where a woman wins survival against her murderous husband only through her ceaseless invention of stories that please him.

Adams’s work is, foremost, a symphony, not a political statement. Yet he pointed out on Wednesday that the uphill battle for women's rights isn’t limited to the realm of old stories, or to certain geographical areas. Indeed, San Francisco Symphony’s regular 2016–17 season features no female composers. I suppose we're lucky, then, that this man cares enough to speak.