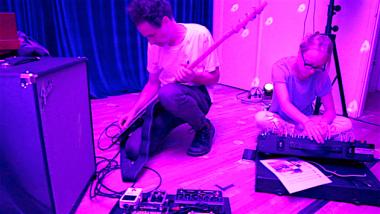 Sound Wizards in a Small House at the Underwolf Festival

Composer Daniel Allas started his piece lying down, a mobile voice amplifier, like those used by tour guides, hung around his neck. In his right hand he held the headset, at arm’s length. While a field recording of faint seagulls and sounds of transit played, he gingerly tried to bring the headset closer to his body, testing the waters. Feedback wailed with each venture, blending in eerily with the seagulls. It was almost medical to watch, like someone curiously testing the pain of a bad cut. Entrancing, Allas moved between different postures and field recordings, and while some sections felt more self-indulgent than others, I was fascinated by the confounding of sound and physical gesture. What sounded like fire could suddenly sound like water. Feedback, mistaken for a seagull cry.

It was most often impossible to tell who or what was making sound during the performances of Brooklyn record label Underwolf’s third-annual summer festival. It was a candy shop for those who like being confounded. Most of the performers took the stage as sound wizards — solo and group improvisors, invested in exploring texture through acoustic sound, electronic processing, and in the use of modular synthesizers.

The space — a portion of a house that was once also a hair salon, now called The Outhaus — was small. And very hot. But the acoustics, somehow, were very, very good. Each night the audience was made up mostly of composers, which isn’t surprising. We are definitely the crowd that will come out for experiences that are brand-spanking-new, to commune with live experiment.

There were three solo acts during the festival, the most conventional of which was a stunning set performed by cellist Ashley Walters. Running two short Morton Feldman works into a solo from String Quartet No. 5 by Wadada Leo Smith, even here she created something unheard before, a cento poem of solo cello work. Her final piece, Näthe by Trevor Bača, was in lockstep with the timbre fixation of the rest of the festival. Her bow constantly roaming between the fingerboard and the bridge, she described it as the most virtuosic piece for the bowing hand she had ever played.

The majority of the music was improvisatory, and most groups duos, including hi from Oakland, and Los Angeles duos A n D, and Steuart Liebig with Vinny Golia. Each pair emphasized different elements of sound or performance in their modes of improvisation. For instance, the mainstay of Leibig and Golia’s expression was the lava flow of their lines. They ripped through scales and notes like cats in a box of tissue paper. On top of this ferocious virtuosity was keen attention to each other, giving space and following one another through fast-changing colors and registers.

A composer and multi-wind-instrumentalist, Golia switched between clarinet and bass clarinet, his playing shocking and mercurial. Bassist Liebig focused more on change of tone than on note velocity, and while on his fretless electric bass he produced an incredible range of deadened to singing qualities. As can happen with great improvisers, the two seemed to know instantaneously when the music was done. No flare went up, they simply halted, the experience perfectly sealed.

For other groups, there was a particular patience for allowing rich sound worlds to evolve. There is a risk of boring the audience in this kind of experimentation, but from those that are sensitive to timing and form, it can be absolutely transcendent, as it was with Matt Barbier and Daniel Silliman’s duo. Armed with his trombone and a fleet of effects pedals, Barbier thickened the air with long distorted tones. Composer Silliman on a modular synthesizer contributed a rhythmic clutter that suggested a beat pocket that I found myself swaying to.

Though their set evolved in many directions, it always sounded a bit like a boiler room — deep environmental rumblings topped with a halo of benign high frequencies. It could have become too loud at almost any point, but didn’t, and it was thrilling to ride just underneath some bursting point. I definitely jumped when the synth suddenly catapulted, screaming into the stratosphere, only to be quickly stifled by Silliman. It seemed like an accident, but soon after this incident, the two players let the top fly off the music, and somewhat predictable wailing ensued. I asked Silliman later if the sudden outburst had been a mistake, and he slyly replied that it was what they call a “game-changer.”

At the forefront of all these sets was the performers’ investment in sound texture. On the third night, the trio Tasting Menu (Tim Feeney, Cassia Streb, and Cody Putman) blew the synthesizers out of the water with an acoustic sound pad made from a whole host of found objects. Softly rubbing tiles together, rolling a just-off-spherical stone around the wooden floor, committing various abuses to cowbells. Small tape recorders and radios were used discreetly, but by and large, all the sound was unamplified and acoustic — the rhythm of a large rock rolling around in a wooden box, the sinewy hiss of a bowed temple block. It was remarkable how at the end of this string of electronic nights, that we would all be floored by the sound of loose change jangled in a ceramic bowl.

Free improvisation has a connotation of wildness, of lowered inhibition, but singer Carmina Escobar illustrated that improvisatory artists are often bastions of incredible control. The final act of the final night, she sat on a piano bench, back lit, and wheeled through her range, releasing multiphonic barks at her lowest, and eking out tiny melodies at her highest. Only barely being able to see her face helped divorce those airy sounds close to her speaking range from the idea of speech, and to allow the immense range of pitch and texture to become more akin to instrumental sound. And her instrument is magical, more various than any of the instruments in the three nights leading up to her performance. She indicated to us, transfixed, that her performance was over by letting loose a warm laugh over us.

Sound and Fury Introduces a Decet of So-Cal Composers

The fifth season of the L.A. contemporary music series Sound and Fury concludes by putting a few young composers on our radar screen.