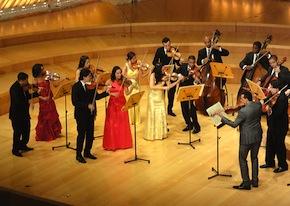 Sphinx Virtuosi Awaken the Past

The Sphinx Virtuosi, whose performance on Wednesday was the first Dinkelspiel Auditorium concert in Stanford Lively Arts' season, is a conductor-less 18-member string orchestra of young professional players. It's sponsored by the Sphinx Organization, a Detroit-based nonprofit group whose purpose is to increase the participation of Blacks and Latinos in classical music.

As an exercise in overcoming cultural stereotypes, Wednesday's concert worked both ways. No presumption that special programs for minorities will lead to overpromotion of the underqualified could survive listening to this group. It is an orchestra of complete professionalism and winning personality. The program included both an Afro-American and Latin American composers; however, the proof of these performers' commitment and understanding of the field of music they've entered was in their renditions of works by the old masters.

This was especially true considering that those old masters were Mozart and Bach, two composers that are particularly difficult to play well. Mozart's music is open and clear, leaving nothing for performers to hide behind. Bach's is intricately constructed and needs a special touch to bring it to life. These succeeded. The key to this performance of Mozart's Divertimento in D, K. 136, was rhythmic vitality. The cellos, basses, and violas chugged through their parts with the kind of vigor and flexibility that makes this charming piece go.

Above that, the violins floated with the slightest touch of unease. Their tone was only partially resonant, not assisted by the dull acoustics of the back seats in Dinkelspiel; their bounce was not quite as crisp as the lower instruments'; and the melodic lines did not always fully flesh out. Nevertheless, they were capable and charming. In their hands, Mozart's music lived.

The same was true, more arrestingly, of Bach. This selection was the Ricercar à 6 from The Musical Offering, in a realization for strings by Gustav Lenzewski. In place of the bold clarity of Mozart, the sound was a slippery sliding thing, eerily dropping its way through the overlapping counterpoint, and only partially explainable by the almost total lack of vibrato.

In addition, the Virtuosi offered some neo-Baroque music. The Fuga Criolla by the popular Venezuelan composer Juan Bautista Plaza was full of counterpoint yet played quite unlike the Bach. It came out dominated by bold firmness and unbridled consonance. On a smaller scale, we had the Norwegian composer Johan Halvorsen's Passacaglia for violin and viola, based on a keyboard piece by Handel. This work is a favorite at [email protected]'s young performers concerts. However well those students play it, it was outclassed here by Virtuosi violist Paul Laraia III and guest violinist Danielle Belen. Belen has a quick dancing way with her violin, giving the impression of running rings around the larger, perhaps clumsier viola. That was an illusion only, though, as the final double-stops in particular showed Laraia completely in pace with Belen.

Besides the encore, a confident reading of the finale of Bartók's Divertimento, the remaining orchestral piece was the scherzo movement from the Sinfonietta No. 2, "Generations," by an Afro-American composer, Coleridge-Taylor Perkinson. This is a work I would have liked to have heard the rest of. The brief scherzo is almost entirely pizzicato, with a bowed passage in violas and a little syncopated hand-slapping of the double-bass strings. Despite a few jazzy touches, it's less of a jazz-classical fusion work than an essay in the traditional American nationalist classical style. A little bit more in the other direction would have given a better impression of how well the Sphinx Virtuosi can swing.

One last piece dominated the proceedings, the String Quartet No. 2, Op. 26, by Alberto Ginastera from Argentina. This was played by the Catalyst Quartet, made of the first-chair players from the Virtuosi. They were scheduled to play just Ginastera's finale, but in a spirit of enthusiasm presented the whole quartet, all five movements of it. Here there was no question, as in the Mozart, of the violins resting on the lower strings' laurels. Violinists Bryan Hernandez-Luch and Karla Donehew-Perez gave as much tight energy and sure-handedness as violist Christopher Jenkins and cellist Karlos Rodriguez. Through Ginastera's perpetual-motion opening movement and finale, his ghostly scherzo full of special sound effects, and the two cautious, softly dissonant slow movements, the resemblance to a really good performance of a Bartók quartet was unmistakable.