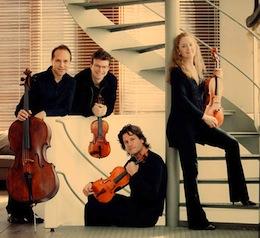 In its operning concert of the season for Stanford Lively Arts on Sunday afternoon at Dinkelspiel Auditorium, the St. Lawrence String Quartet gave the first performance of a new work by the Argentine composer Osvaldo Golijov (b. 1960).

Or ... maybe not. Nobody, not even the composer, was sure if this was a premiere or an experimental tryout.

Golijov admits to deadline-pushing — the second movement of this brief, two-movement piece was begun a week ago and turned in the day before the concert — and to never considering his works quite finished. He might revise these movements extensively, or add more to them, or even separate them into different compositions. Or, when St. Lawrence violinist Geoff Nuttall said in the postconcert talk that “You haven’t heard the last of this work” (referring to the certainty of its revision), Golijov lightly replied, “This might be the last you hear of it.” Whether it’s destined for the standard repertoire or the wastebasket, one thing’s clear about this work-in-progress: It hasn’t progressed far enough yet to have a title.

The two movements, though distinct in mood, have much in common. They’re both inspired by Golijov’s love of Schubert; they’re both consonant, lyrical, and evenly paced, compared to Golijov’s typically abrupt, jagged style; and they’re both in the retroverted form of first-violin solos with accompaniment.

To me, the [Golijov] work felt less disconnected than incomplete.

The solos were well-suited for the unruffled style of violinist Scott St. John. In the first movement, he has a slow melody of long-held notes with a wide, warbly vibrato over a fast-moving, ceaseless ostinato from the other instruments. In the motoric rhythm, in the melodic turns of the violin line, and in the way the piece suddenly stops without warning, it’s an uncanny copy of classical minimalism. Only the harmonic dryness of the ostinato is a sure sign that it’s not by Philip Glass.

In the second movement, St. John has a faster-moving lyric line over longer slow chords. The music slowly breaks apart to give the other players a turn at the melody, notably in a lengthy solo for violist Lesley Robertson, over high held notes from the others. A gradual return to the first violin comes over soft, distant, two-note phrases in the accompaniment, a cross between a rocking motion and a faraway, alarmlike bell. Throughout the performance, caution and respect seemed at the top of the performers’ minds.

Do the two movements belong together? Golijov said he considered writing a bridge passage, but decided to trust the audience to connect them in their minds without additional help. To me, the work felt less disconnected than incomplete, and in the second movement a little unshaped. I would consider this a workshop presentation. We can look forward to the true first performance of a longer work later.

And Now for Something Older and Freer

The rest of the program was completed a long time ago and received freer performances from the ensemble. Nuttall, sitting in the first chair, gave one of his best “wild man” shows in the finale of Haydn’s Quartet in D Minor, Op. 76, no. 2, digging into the frequent double-stops, squeaking out the exclamatory high notes, and adding glissando slides that are not quite there in the score. The other players responded in kind. Microscopic pauses and a distinct “push” on held crescendo notes enlivened the dense, complex first movement. Christopher Costanza’s cello growled loudly and, judging from his restraint in other passages, deliberately, especially in the strange, canonic “Witches’ Minuet.” This was an energetic Haydn, kept just within reasonable bounds.

This was an energetic Haydn, kept just within reasonable bounds.

Schubert’s epically long Quartet in G, D. 887, with St. John back in the first chair, illustrated what Golijov sees in that composer. Tremolo passages in the first movement had the same wide, metallic ring as Golijov’s ostinato. To get this out of Schubert required a greater lack of restraint than had been shown in the Golijov. Particularly in the first two movements, the players let loose with a maniacal, angular performance from everybody, even the typically sane Robertson and the cautious St. John. The slow movement was fast, stringy, and at times querulous in a way resembling difficult 20th-century music. Individual and idiosyncratic interpretations abounded. Costanza’s solos were tense and questing, while Nuttall’s were light and almost comical. It was as if the entire Quartet had been a message left by some crabbed eccentric in a remote alpine Schloss. The performance was thrilling, and broke the bounds kept in the other pieces. What’s harder to say is whether it was likable or not.