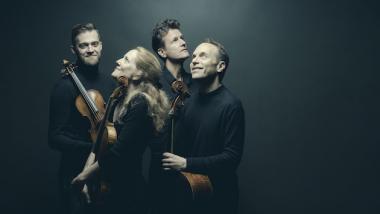 St. Lawrence Quartet Breaks Out of the Box

The sole conventional string quartet on the program was Beethoven’s Op. 18, No. 4, in C Minor. Even early Beethoven is rougher and brusquer than his teacher Haydn, and this, the only minor-mode quartet in the Op. 18 set, is the most so. The St. Lawrence Quartet, however, specializes in Haydn and knows how to tame early Beethoven: Play it like Haydn. Taking a cool, classical approach to this quartet doesn’t restrain it: it’s too bounding a beast for that. What it does is bring the music down to the same excited, joyful level that the St. Lawrence likes to ramp late Haydn up to.

Surging waves, both in dynamics and in tempo, dominated this performance. The players made the most out of such moments as the almost surreptitious crescendo in the opening bars of the first movement and the Prestissimo at the end of the finale. Violinists Geoff Nuttall and Owen Dalby trading off voicing styles over rhythmic vitality from Lesley Robertson’s viola and Christopher Costanza’s cello was also a stylistic delight.

The big piece of the concert, both in length and in ensemble, was Mendelssohn’s Sextet in D Major, Op. 110. The young composer wrote this at age 15 in 1824, but never published it. (The high opus number was assigned at its posthumous publication.) Some juggling of personnel was required to staff this one. Dalby was the sole violinist, Nuttall moved to second viola (first time I’ve heard him play this instrument), and two guests, double bass player Anthony Manzo and pianist Anne-Marie McDermott, were added.

Keith Horner’s program notes describe the Sextet as “to all intents and purposes a miniature piano concerto.” There are, to be sure, passages where the piano rambles soloistically over simple chords from the strings, but the work is not built like a concerto. What it has in common with Mendelssohn’s mature piano concertos is a jittery fussiness that’s completely absent from his chamber music for strings alone, even early works like the Octet that soon followed the Sextet. It is, of course, the piano that’s responsible for this character. McDermott was kept constantly busy in a light, Mendelssohnian way. Her shared chords with the strings were satisfyingly crunchy.

The Sextet opens with a large, genteel Allegro vivace, and closes with an almost equally large finale in the same tempo, with a tiny Adagio and an even tinier minuet separating them. The players managed to break the placidity of the first movement with some push in the development. The finale was more accepting of energy, with the return of the minuet theme a particularly dramatic moment. This effect could not have happened had the minuet sounded anything like a mature, feather-light Mendelssohn scherzo.

The remaining item on the concert was a suite of three disparate pieces — no applause separating them — by Olivier Messiaen, a composer who, apart from his epic Quartet for the End of Time, is rarely heard at chamber music concerts. The suite opened with one of his last works, the simply-titled Piece for Piano and String Quartet from 1991. This is a stark and eerie thing, reminiscent of the more anguished works of Shostakovich or Alfred Schnittke. McDermott would play a sequence of piano chords in typically florid Messiaen harmony. After a pause, the quartet would reply with a shrieking motif supposedly inspired, like much of Messiaen’s music, by birdsong: If so, it’s a terrifying nightmare of a bird. These exchanges repeat for a while. Sometimes the strings and piano play together, producing crunchy chords akin to the ones in Mendelssohn.

Then there was a switch to something totally different: O Sacrum Convivium, a slow motet in warm consonant harmony for four-part unaccompanied chorus, composed in 1937. Played by the St. Lawrence with the vibrato typical of string instruments, it had an interesting, textured feel absent from the original choral version.

Lastly, Costanza and McDermott played “Praise to the Eternity of Jesus,” the cello and piano movement from Quartet for the End of Time, dating from 1941. Over a soft and steady pulse of simple piano chords, Costanza wove his long, slow, gradually ecstatic melody. Frequently he applied portamento slides between notes, a vanishingly rare choice of effect among modern cellists. These assisted the gradual rise in intensity, which was also subtly assisted by a dimming of the stage lights, closing in to a focus on Costanza. The lights did not revert when the passion broke near the end, nor did Costanza’s playing release the tension as dramatically as it could have. Nevertheless, it was a remarkable little showpiece.

Scenes Along the St. Lawrence

Stanford Lively Arts’ “Sundays With the St. Lawrence” series has become one of the more consistently rewarding events on the Bay Area music calendar. Stanford’s ensemble in residence since 1998 returned with a special guest to continue its ongoing exploration of the chamber repertoire.