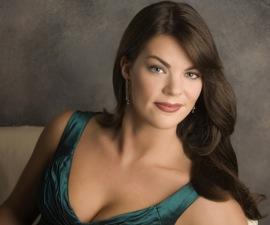 Steven Blier’s frequent New York Festival of Song (NYFOS) appearances in San Francisco are always cause for celebration. Not only is his material invariably beautiful and often unique, his penchant for interspersing song with spoken insight and anecdotes also adds extra delight to the proceedings.

A Merola alum comes into his own

The program consisted of four parts: Spanish Art Songs (Guridi, Turini, Granados, and Toldrá), Zarzuela Arias and Duets (Sorozábal, Torroba, and the team of Giménez and Nieto), Latin American Art Song (López-Buchardo, Guastavino, and Ginastera), and Latin American Popular Songs (Gardel, Grenet, Orefiche, Hernández, and Simons). If many of these composers are unfamiliar, you are not alone. Some of their music is extremely hard to come by. More’s the pity, since so many of their songs are not only seductive in their own rite, but also incredible vehicles for singers eager to demonstrate the full scope of their artistry.

Most astounding of the artists was Sara Gartland. A tall, slender, dark beauty with large features and a most versatile voice, Gartland took to the stage like a runway model set to slay. Dressed to kill in a stunning asymmetrical blue dress and a large rhinestone clasp, she gave notice that her voice was only one element in her substantial arsenal. Gartland’s facial expressions, sly movements, seductive smiles, and outstretched arms, all perfectly choreographed yet seemingly spontaneous in their fluidity, were as arresting as her instrument.

In Granados’ Amor y odio (Love and Hate) and El mirar de la maja (The gaze of the maja), Gartland’s voice was searing, filled with color, and on higher notes, fluttery of vibrato. Switch to Giménez and Nieto’s Rossini takeoff, Me llaman la primorosa (They call me “the exquisite”) from El barbero de Sevilla, and she transformed into a spoiled deliciously prima donna with teasing coloratura, imperiously tossed off high notes, a firm and blazing top, and so much captivating stage business that it was impossible to look away for even a second.

In a selection from Torroba’s zarzuela Luisa Fernanda, Gartland’s voice ranged from soft and opulent to sharp and sexually dangerous. The Guastavino found her beautifully poised and polished, while Gardel’s El dia que me quieras (The day that you love me) had her lightening her voice to soubrette proportions. Only a few of today’s top sopranos can be so convincing and compelling in such wide-ranging repertoire.

In an utmost display of versatility, Gartland took her place between Montenegro and Kness to seductively rumba her way into their and our hearts in Simons’ La negra quirina (The slender girl). (Talk about type casting!) Her gifts as a naturally seductive stage animal with the voice of many colors almost stole the show.

Montenegro wasn’t far behind. The voice of the Southern California native and graduate of the San Francisco Conservatory of Music possesses the thrilling passion and squillo of a young Rolando Villázon. It may be lighter and warmer, but it shares some of his fellow Merolini’s darkness of timbre. And, judging from his recent Nemorino in Merola Opera’s 2010 L’elisir d’amore, it’s a voice that is growing and maturing at a rapid pace.

Although Montenegro tends to sing with his eyes closed, his sound is so beautiful, and his passion so believable, that his voice transmits the transparent sounds of an open heart. He received deserved cheers at the conclusion of Hernández’s Lamento borincano (Lament for Puerto Rico).

Kness was a more stolid presence. When he occasionally sang full voice, or darkened his tone and sang lower in the range, his instrument exhibited the desired richness and strength. For much of the time, however, he came across as somewhat worn in the middle range and stretched on top. Most curious, when he lightened the voice in Buchardo’s Canción de ausencia (Song of absence), sounded a mediocre pop crooner in desperate need of a shot of adrenaline. The animal sensuality and handsome tone that Catherine Malfitano drew from him in her 2008 Merola Don Giovanni of a few years back was missing in songs that fizzled rather than sizzled.

Blier played wonderfully, without drawing attention to himself. Almost self-effacingly, he invited Hanlon to accompany two of the numbers; this the younger pianist/coach did in a manner so sensitive and artful as to belie his affectless countenance. He also did a fine job on the bongos. There is a promising future here.

This family affair — even tenor David Lomelí, fresh from his widely heralded triumph as Nemorino at New York City Opera, flew out to hear his former colleagues — was far more than a love fest. As a showcase for wonderful music and versatile artistry, it was supreme. Rarely do audience members leave a hall with such smiles of satisfaction.