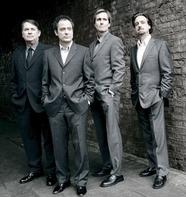 David Bratman on October 21, 2008
Economic crisis. Unedifying political campaigns. Fires, droughts, and earthquakes. What better to do with your anxieties on the night of the third presidential debate than spend the evening with Dmitri Shostakovich, whose problems were greater than yours? Wednesday's encounter with Shostakovich at Dinkelspiel Auditorium, under the auspices of Stanford Lively Arts, was hosted by the talented musicians of the Emerson String Quartet.

The Emerson Quartet has played the complete Shostakovich quartet cycle more than once, and even recorded it live, so they faced no challenges in playing the final three (perhaps the most difficult three) of the composer's 15 quartets. Shostakovich rarely indulged in the conspicuous complexity of such modern quartet masters as Béla Bartók and Elliott Carter, but in his final years the depth that had always lurked beneath his surface simplicity really came bubbling up. Listening to these quartets, then, may be more of a challenge for the audience than for these performers. This was nicely epitomized in the opening of the Quartet No. 13, Op. 138 (1970), which began the program. Violist Lawrence Dutton played an unaccompanied line that happens to be a Schoenbergian tone row — not what a listener might expect from the usually tonal Shostakovich, though he experimented with 12-tone procedures in several works from this period. This tone row is immediately followed by a consonant tonal passage for all four players that set the, well, tone for what followed. It was only the first of many unaccompanied solo passages in these quartets. They are extremely spare works; there may have been as much time with only one instrument playing as with all four of them playing. And Dutton's careful enunciation of the composer's direction to play more quietly as the tone row progresses was just the first example of the immense care and thought that the Emerson musicians have given to the meaning and interpretation of Shostakovich's plain writing. This command of subtlety was evident throughout the concert, the more so as the players emphasized the music's quiet, contemplative side. Slashing, vehement passages and outright screams of pain occur frequently enough in the three quartets. But nobody put those to the utmost test. Instead, the concert's character was set by that tonal passage that followed the initial tone row. It was played with breathtaking, stark beauty. A bit later, first violinist Philip Setzer's chirping staccato solo came out of the unison like an unseen bird suddenly rising from a tree. Tragedy, creepiness, and deliberate awkwardness appeared and, in one brief solo, cellist David Finckel suddenly leapt out with a fuzzy sound akin to that of an electric guitar.

Quartet No. 14, Op. 142 (1973) also begins with a brief viola solo, though the work was dedicated to a cellist. Unsurprisingly, then, most of the solos belonged to Finckel, with a generous helping to Eugene Drucker, here playing first violin. Finckel gave some solos an unusual sense of expression, dry and impromptu, as if his instrument were talking, or even whistling, rather than the usual metaphor of singing. Yet he also played with great beauty, notably in cooperation with Drucker in an astonishing passage in the finale where the cello harmonizes above the first violin. Quartet No. 15, Op. 144 (1974), one of Shostakovich's last works, is famous for having six movements all of which are marked "Adagio" except for some interludes of the even slower Adagio molto. It's hardly an undifferentiated work, though. Some passages in short notes are fast, and even explosive. Yet it was Dutton's wonderfully moving counterpoint in the "Elegy" and the bittersweet quality of all four players in the "Nocturne" that characterized the performance. As in No. 14, Finckel gave some of the more interesting work, playing the hard-slashing crescendos of the "Serenade" like a dead thing suddenly reborn, and leaping out again with an abrupt twang near the end of the "Funeral March." So, despite a few surprises, what we heard in the six Adagios, as well as throughout the evening, was the Shostakovich who was numbed and exhausted by his life's experiences, rather than the man angrily protesting against his bad health and his political entrapment. Such a portrait may lead to subdued applause, but with this amount of control and thought from first-rate musicians like the Emerson, it embodies an effective and touching interpretation.