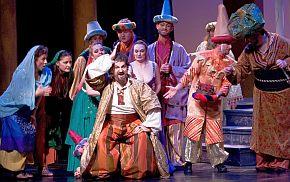 David Bratman on October 7, 2008
The Rose of Persia, currently being performed by Lyric Theatre at the Montgomery Theater in San Jose, was originally produced in 1899. It was probably the most successful operetta penned by Sir Arthur Sullivan after his collaboration with W.S. Gilbert. The libretto and lyrics are by one Captain Basil Hood, who did his darndest to serve up a Gilbertian pastiche. The show features a lot of the stock G&S types — the insipid young lovers, the befuddled comic baritone, the Duchess of Plaza-Toro, the Mikado (well, not exactly all of these, but characters just like them) — plus a complex plot in which confusions and mistaken identities pile up into a situation where you can't possibly worry about the impending execution of most of the characters, because this is a comic opera, so everything's got to come out all right in the end. And this hardly qualifies as a spoiler alert: Things do. So as a Gilbertian pastiche it passably amuses, and is very much a rewind to before the time of The Yeomen of the Guard (1888), in which an impending execution is taken seriously. Musically, too, though it's Sullivan's last completed work, it's a rewind. The G&S numbers that emerged by association in my mind were all from the duo's early operettas, like The Sorcerer (1877) or Trial by Jury (1875). The score is perhaps slightly more Persian than The Mikado is Japanese (or at least vaguely Middle Eastern — to a stay-at-home Englishman at the height of the Empire’s power, Persia and Arabia were pretty much the same). The songs are of mixed quality. Dramatically the second act is superior to the first, but the best run of music comes near the end of the first act. The cleverest number there was a "House That Jack Built"–style, build-on, fast patter-song in which the Mikado — I mean, the Sultan — and his evil minions introduce themselves. By far the best music in the entire work was an ensemble piece near the end of the second act, as the characters try to come up with a happy story that will please the Sultan and induce him to issue stays of execution. Yet all they can think of are various English nursery rhymes, of all unlikely things, which they cast in tragic tone and sing of in mournful elaboration ("And the dog of that person named Hubbard/Accompanied her to the cupboard") to a passably good tune. It tickled me enough to make the visit worthwhile, though I’ve found a Web review of various recordings that calls this a boring song that would be better omitted. 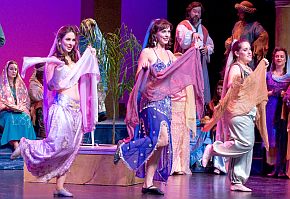 Although it’s not that great a show, The Rose of Persia amounts to a complex production with a large cast. And the fact that the plot turns on a hallucinatory drug probably doesn't encourage companies to put it on these days, either. So Lyric Theatre deserves credit for taking the trouble, especially since G&S audiences are notoriously conservative. Sunday's matinee was nearly deserted, but still the show went on with gusto. Much of the acting was good: Michael Cuddy as the Sultan, Jim Martin as his executioner, and Mark Blattel as the befuddled protagonist were the most outstanding. The costumes, designed by Lisa Lutkenhouse Lowe, were really impressive, and the sets representing solid stone buildings wobbled only slightly when the characters sat on them. Anyone who cares at all for musical theater should consider dropping in next weekend and giving a small boost to the company that has produced this obscure though interesting corner of the repertoire.