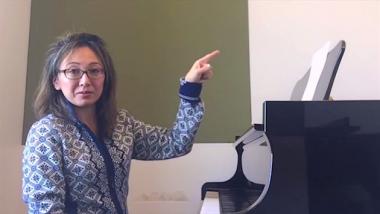 Sunday in the Gallery With Cal Arte

Pianist Tamami Honma didn’t come out of nowhere to win her SFCV “Best of the Bay” award this year for playing a new Luis Andre Cobo concerto with the Cambrian Symphony. She also performs with other South Bay community orchestras — for instance, the Palo Alto Philharmonic in Saint-Saëns last weekend, and the Winchester Orchestra in Tchaikovsky, upcoming in March — and she’s known to local audiences in the Santa Clara-Cupertino area for her “Beethoven Odyssey” programs. These have featured cycles of Beethoven’s sonatas and concertos, played by herself or with colleagues from the Cal Arte Ensemble.

On Sunday, Dec. 10, Honma appeared in a regular Sunday Gallery concert at the Triton Museum of Art in Santa Clara with her regular recital partner, violinist Julian Brown, and cellist Yong-Zi Ma, in a supplemental Beethoven program. They played the grand “Archduke” Trio in B-flat, Op. 97 (1811) and complemented it with Shostakovich’s Trio No. 2 in E Minor, Op. 67 (1944).

The “Archduke” Trio is the most expansive and airy chamber work Beethoven ever wrote. Its long-breathed melodies and casual atmosphere can seem distant or uninvolving. What it needs is the kind of casual joy in life brought to it by these players. Their relaxed flexibility in phrasing made everything roll along, from the graceful first movement through the clicking Scherzo and the melodically rich slow movement. The finale was the movement most transformed from other performances I’ve heard. Here it became an infectiously irregular country-dance.

Like Beethoven’s, the Shostakovich Trio is a masterwork of the form, in four movements with the Scherzo second, and the slow third movement running directly into the finale without pause. Otherwise they’re completely unalike. Written during World War II, it’s dark, angular, and ends with an enigmatic shrug typical for this composer’s more inward works.

There was fine playing here, too, but this performing trio felt less at home than in the Beethoven. There was some struggling to keep in tune and balanced. It wasn’t easy for Ma to begin the work, unaccompanied, playing a quiet and tentative theme, muted, in parallel notes two octaves apart. The best parts of this performance were Honma’s power chords opening the third movement passacaglia, and Brown’s expressive jauntiness and snaps in the finale’s jumpy theme.

The concert was held in one of the Triton’s front galleries, as the back room where I’d heard previous concerts here has been ruled out for fire safety reasons. The acoustics here are not ideal, causing problems mostly in balance, something that can be adjusted with further practice. Honma played on an upright piano, the only time I’ve heard such an instrument in a serious concert. Its natively plonky sound didn’t disguise the fine pianism in the notes being played. While Honma succeeded in playing very softly when called for, the piano did tend to drown out the strings, especially in the more tentative passages of Shostakovich.

For an encore, the event suddenly became a family concert. Honma played a piano trio arrangement of the “Trepak” (Russian dance) from Tchaikovsky’s Nutcracker with her two string-playing sons: violinist Ethan, 13, and cellist Samuel, 10. Samuel is a pupil of Ma’s, and I look forward to more work from this family in the future.

The results are in: Congratulations to the winners of our third-annual Best of the Bay reader poll.