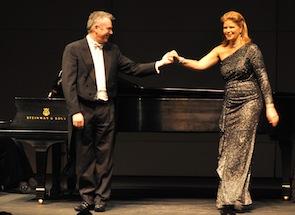 You’d never know from the freshness of Susan Graham’s mezzo-soprano that she graduated from the Merola Opera Program almost 25 years ago. As heard in Zellerbach Hall on Saturday night, in the latest of many recitals since her Cal Performances recital debut in 2000, this much-loved artist delivered a host of effortlessly produced sounds so healthy, warm, and filled with beauty that it was tempting to fantasize that life was equally sweet and uncomplicated.

It isn’t, of course. And there was the problem. If song recital were mainly about beautiful sounds, Graham’s partnership with the superb, intentionally restrained Malcolm Martineau would have been an unalloyed triumph.

But greatness in art song is about far more than pleasing sound. Art song demands that a singer convey, with utmost sincerity, a huge range of emotions, from ecstatic highs to deepest despair. Ultimately, the recitalist must bridge the space between hearts, so that the feelings she expresses resonate in the depths of our being as if they were our own.

Give Graham songs such as Poulenc’s “Fleurs” (the last of his six Fiançailles pour rire that she presented in the second half) or Hahn’s “À Chloris” (her final encore) — two gems that require, in addition to poise and steadiness, the glow of love and inner rapture — and she is supreme. She is also wonderful, if hardly as heart-rending as Dame Janet Baker, in such French repertoire as Berlioz’ La Mort d’Ophélie. But when asked, on this occasion, to sing songs that required her to tear herself open and lead us deep within, she invariably came up short. 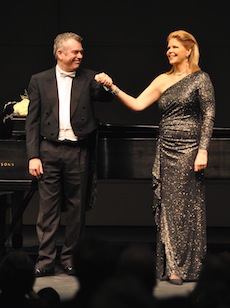 Graham’s limitations were most apparent in Lady Macbeth (1970), Joseph Horovitz’s extended scena for mezzo-soprano and piano. The composer describes its text, drawn from Shakespeare’s speeches for Lady Macbeth, as “intended to portray the development of this character, from early aspirations to grandeur, to later power and finally to guilt and madness.” Quite exciting, especially if the mezzo can manage to sound deranged as the scena ends with “Out, damned spot! …Fie my Lord, fie!”

But Graham did not. Perhaps the only time she dipped into something resembling the empty darkness of chest voice came when she opened up her sound on the phrase, “give me the daggers.” Otherwise, she was one of the sweetest Lady Macbeths on record. The blood that soiled her hands was cleansed centuries before she reached the stage, and her madness equally sanitized. Instead of jerking us around, tearing at our insides, and leading us to confront our own inner Lady Macbeths, she let us off easy.

Equally soft-sell were the six songs by Schubert, Schumann, Liszt, Tchaikovsky, Duparc, and Wolf on texts from Goethe’s Wilhelm Meister. All convey different aspects of the poignant tale of Mignon. Despite a radiant ending, Schubert’s “Heiss mich nicht reden” (Don’t ask me to speak) seemed devoid of suffering. Ditto for Schumann’s “So lasst mich scheinen” (So let me seem). Tchaikovsky’s well worn “None but the lonely heart” (sung in Russian) thankfully escaped sounding maudlin or melodramatic, but it is far more than an exercise in dignity and poise.

Instead of allowing pathos to carry her away in Liszt and Wolf’s very different versions of “Kennst du das Land” (Knowest thou where?), Graham injected an occasional sigh at the end of phrases. These sighs seemed gratuitous, sadly disconnected from the warm sounds that preceded them. Little hints of suffering, the occasional hint of hollowness, and a few quasi-passionate fortes do not suffice in music of such depth.

Most telling was the first encore, Thomas’ “Connais-tu le pays” from Mignon. Throughout her career, Frederica von Stade tore us apart with this gorgeous music. Graham’s rendition was yet one more sweet song.

We know from Graham’s San Francisco Opera performances in Heggie’s Dead Man Walking, Gluck’s Iphigénie en Tauride, and Handel’s Ariodante that she can indeed let loose while maintaining beauty of tone. Why didn’t she do it here? Does she feel that unbridled passion is inappropriate to the art song setting? Or is she perhaps entering a phase of her career where pushing the voice exposes range breaks that she cannot hide in the near-naked intimacy of recital? Certainly her coloratura facility remains intact, as evidenced by the recital’s beautiful opening number, Purcell’s The Blessed Virgin’s Expostulation.

Equally intact is her slightly sinful, irresistible sense of humor. In her final group of Naughty Ladies – the big contrast with the Good Girls of the recital’s opening half — she may not have been Broadway bawdy in Cole Porter’s “The Physician” (Nymph Errant), but she was funny enough. She was an equal joy in Messager’s “J’ai deux amants” (I’ve got two lovers) — take that, Rick Santorum — and Ben Moore’s “Sexy Lady.” The latter, available on Graham’s Carnegie Hall Recital disc, is a scream, especially in its lament that onstage romance with the adamantly out David Daniels is as thrilling as sex with a cocker spaniel. If only the screams of Mignon, Lady Macbeth, and Ophelia had been as real.