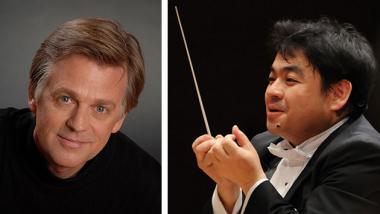 Most performances of Shostakovich dramatize the anguish at being trapped in Stalinist Russia or the cheekiness with which he is said to have defied the regime. By contrast, Symphony Silicon Valley’s entry on Saturday at San Jose’s California Theatre was titled “Shostakovich: Gentleman Comrade,” and with the help of guest conductor Tatsuya Shimono, presented a civilized, gracious Shostakovich, half cheerful and half serious.

The cheerful half of the program began with a work known formally as the Suite for Jazz Orchestra No. 1, or – even more misleadingly – as the Jazz Suite No. 1. Despite the title, it’s not jazz. Music-loving Soviets were intensely curious about Western popular music. The musical commissars, however, would not let any authentic jazz into the country. So when Shostakovich tried to compose some in 1934, he had to guess what it ought to sound like.

The result more resembles the dance band café music popular in previous decades in the West, music which the Russians had heard, than jazz. The dance forms that Shostakovich chose for his suite – waltz, polka, and foxtrot – suggest the result. The instrumentation includes saxophones, as well as a xylophone and a Hawaiian guitar, which get prominent solos. It’s an entertaining piece of music and was played winningly, though rather roughly, by the musicians.

Stephen Prutsman brought a casual, low-slung manner to the solo part. The spasmodic rhythmic jerkiness he gave in the Allegros contrasted with the military-band rigidity of the orchestra, yet the performers managed to get through it all right. There was a finer meeting of the minds, somewhere in between in style, in the Andante. Prutsman is a lively pianist for whom slow lyric beauty is not a native language, yet he delivered it well.

The Shostakovich symphony that would have most closely matched the spirit of these works would have been the Ninth, or perhaps the Sixth. Instead, SSV played the Fifth, in D Minor, Op. 47. This is not a cheerful or purely gracious work. It has its dolorous parts, and its grandly patriotic parts. It is, however, entirely populist in its language, and it has been exceedingly popular since its premiere in 1937.

Shimono conducted the symphony in a slow, dignified manner, devoid of the subtext of Shostakovich as a secret rebel. This was a Fifth consistent with the reading that Soviet propaganda of the day gave to it. In words attributed to the composer, it places “the making of a man … with all his experiences in the center of the composition.”

The performance was straightforward and clean. The first and third movements came to stirring climaxes. The faster movements proceeded with calm energy, eschewing the common shrillness in the scherzo or pomposity in the finale.

One technical result of this is that all the solo lines and many of the inner parts were clearly separated and distinctly audible. This made performing flubs stand out prominently: There were more than there should be. When everyone was on point, as they frequently were, the orchestra’s sound was pleasing.

For an encore, Shimono offered the March from Shostakovich’s Suite for Variety Orchestra, sometimes known as the Jazz Suite No. 2. Prutsman, for his encore after the concerto, delivered a stomping, Art Tatum-style jazzed-up arrangement of the 1920s popular song “Has Anybody Seen My Gal?” Not the usual classical concert encore, it appropriately fit the heyday of the California Theatre and pleased the audience. And maybe Shostakovich would have loved it, if he could have heard it.