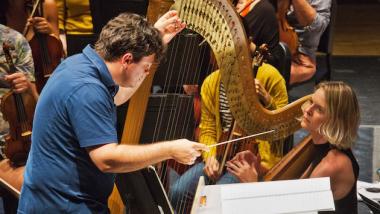 Tan Dun’s Secret Songs Get an Airing at Cabrillo Festival

The Cabrillo Festival’s concert of Saturday, Aug. 10, was female-dominated, even though only half of the works, constituting under half the elapsed time, were composed by women. That’s because the big work on the program, Tan Dun’s Nu Shu: The Secret Songs of Women, is based on a secret, 900-year-old script and vocal tradition found in Hunan — and used exclusively by women.

The Philadelphia Orchestra commissioned Nu Shu (2013), expecting a 25-minute harp concerto. What they got, according to Festival Music Director Cristian Măcelaru, was a 42-minute work that also included 13 short films with their own soundtrack. Măcelaru was then assistant conductor of the orchestra, and it fell to him to try to talk Tan Dun into trimming the concerto back to its intended length. Tan Dun must be very persuasive: after an hour on the phone, Măcelaru was convinced and told the orchestra that it just wouldn’t be possible to cut even one note.

The resulting concerto, as with much of Tan Dun’s music, smoothly blends traditional Chinese melodies with Western orchestration and forms. Sometimes the music is loosely tonal, though often built around pentatonic scales rather than diatonic scales; sometimes there are dense and dissonant tone clusters. Tan Dun has always been an imaginative orchestrator, and this concerto makes special use of water effects, with two percussionists sometimes rhythmically slapping water in a pair of tubs, sometimes pouring water hand over hand.

Harpist Sarah Fuller was front and center, although Nu Shu rarely gives the soloist the kind of opportunities for virtuosic display that you might expect. The harp part does include strikingly beautiful passages, some using traditional glissandos and plucking, some using extended harp techniques such as slapping the strings or striking them with objects other than the hands. But it seemed as though the harp was primarily a prominent solo member of the orchestra rather than the center of attention. Fuller’s playing was lovely, and it would have been good to hear more of her.

Occasionally, the concerto goes in very unexpected directions, such as the jaunty movement that evoked silent movie music more than anything else. I more than half expected to see the performers run around the stage, switching seats and getting up to no end of hijinks. This movement had very little for the harp to do.

That’s because the films of Hunanese women singing, interacting, and going about their lives are very much the center of Nu Shu. Each micro film centers on an aspect of women’s lives, whether women’s relationships with their mothers and sisters, marriage, women’s daily work, or their surroundings. Women sing in many of the films, and in those films, the orchestra becomes essentially an accompanist to the pre-existing music. The women’s singing style varies and sometimes, surprisingly, sounds a bit like Hebrew cantillation.

Nu Shu is, overall, a beautiful and enjoyable work, one that can easily find a wide audience. I’m curious about some extramusical aspects of the concerto. The Chinese women whose music and lives contributed so much to the work’s creation were willing participants and were invited to the premiere in Philadelphia. I’d like to know whether they were paid, considering the extent to which Nu Shu was built around these women and their music. I’m glad that there are no questions of consent, and I would love to know the women’s responses to Nu Shu. Lastly, I’d like to understand why Tan Dun chose to use film of women washing clothes in a river, and their accompanying singing, in Nu Shu. Must women’s labor, which is done out of necessity, be commoditized for profit by a man, and portrayed as a joyful thing, rather than the drudgery it is for so many?

God Music Bug Music has two movements, each based on a the same five-note cell. God Music is full of grandeur, with the five-note cell starting in the trumpets, moving through the trombones and horns, then to the rest of the orchestra. Eventually, it evolves to large blocks of sound, with John Adams-like syncopations. Bug Music uses the cell canonically and becomes more restless and uneasy. By the end of the movement, the orchestra buzzes and heaves in a most insectile fashion.

Fung’s Earworms was inspired by her young son’s repeated references to wheels on a bus; the composer’s notes also say that it “musically depicts our diverted attention spans, our constant barrage of music and other media, and our multitasking lives.” It’s a wild and witty piece, in which fragments of music emerge, whirl around us, mutate, loop, transform. Some are original, some are quotations of famous works. Sometimes the orchestra seems to just give up, collapsing in on itself; sometimes it buzzes and leaps, finally reaching a powerful ending (and along the way giving Fung’s son his bus wheels).

I wish that Psalms Without Words had been played twice. The composer’s notes indicate that it consists of seven sections, “mostly long single phrases,” but they flow into one another and pass by so quickly it’s difficult to identify them. The sections refer to lamentations, angels, and other religious subjects. The performance of Psalms Without Words felt awkward and not quite jelled; a second performance would have clarified the source of the awkwardness.

Tan Dun’s Buddha Passion Is an Opera in Waiting

The composer’s newest synthesis of East and West needs a visual component and some cutting.

The prolific polymath talks about her upcoming premiere, the progress of women composers, and her commitment to music education.