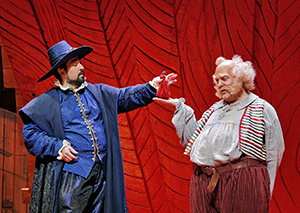 Just ask “the critics,” and you’ll be told that Welsh bass-baritone is one of the great Falstaff’s of this or any age. But see him on the stage of the War Memorial Opera House, in one of the seven remaining performances of Falstaff, and you may encounter, depending upon the night, a very different and far more understated Sir John than he delivered in Los Angeles in 2005.

Vocally and physically, Terfel’s Falstaff remains magnificent, with his giant, peak form voice and towering frame dominating the large stage, even when he sits in his quasi-throne of a chair and sings softly. But emotionally, his Falstaff is far different from those who generate a laugh a minute. He’s far more morose than you’d expect – far more like a long-term alcoholic who has seen better days, and who remains trapped in his delusions.

When Terfel’s Falstaff finally rises from his chair and lumbers around, in steps first stiff and halting, then preposterous, he inspires compassion far more than laughter or derision. (His ridiculous outfit in the seduction scene in Ford’s house is often funnier than he is.) Yet, as he begins his famous monologue, “Quand’ero paggio” (When I was a pageboy) as a half inward utterance, his wealth of vocal coloration and brilliant use of dynamics may very well convince you that, even if his is not the Falstaff you expected, it’s one whose layered complexity opens a new and far more thoughtful window on the role.

Next to Terfel’s surprisingly nuanced Falstaff, two other stars emerge: Conductor Nicola Luisotti’s ever-insightful orchestra, and contralto Meredith Arwady’s fabulously deep, surprisingly agile Dame Quickly. Wielding his baton as if it were a zoom lens, Luisotti enables us to peer under the surface of Shakespeare and Boito’s characters, and revel in every aspect of Verdi’s brilliant commentary. It is rare to encounter a conductor so attuned to the wit and richness of Verdi’s masterful score.

In this production, directed by Olivier Tambosi, Arwady is the other giant onstage. She may be short and stout, but the fluidity of her face, body, and voice dwarfs that of the other women in the cast. Arwady’s constant delight in the proceedings, and her fantastic voice – her stunning, depth-plumbing “Reverenza” (With obeisance) is one for the ages – state in bright colors what Terfel intentionally tones down.

Soprano Ainhoa Arteta, playing Falstaff’s other main female antagonist, Alice, is not as successful. She looks fabulous, her bright blond hair, slender waist, and alluring bosom highlighted by scenery and costume designer Frank Philipp Schlössmann’s bright blue dress. But on opening night, in the first two acts, her voice sounded as though her inner suffering heroine was struggling to break through the surface. Only in Act 3 did she ditch Tosca and find the bright, happy sound and laughter within the notes that make the role of Alice so fulfilling.

Richard Strauss may have chosen to bid adieu by encapsulating his life’s work in his profound and heart-tugging Four Last Songs, but Verdi chose to say goodbye to opera with joy, sweetness, and light. Hence, amidst the madness of Windsor Forest emerges the perfect love duet between Nannetta and Fenton.

I confess that I failed to understand General Director David Gockley’s fondness for soprano Heidi Stober until now. True, before intermission, she did what she customarily does: tone down the shine and youthfulness of her instrument by adding weight to its middle. But thanks to Luisotti’s light, loving support, she tossed that tendency aside in her love duet, and relaxed into pure, heaven-sent floating tones. Her singing was so filled with the perfume of love’s eternal spring that all I could do was close my eyes and sink into the bliss. What wonderful singing!

As the equally youthful Fenton, tenor Francesco Demuro was with her most of the time. There were moments early in the opera when his voice did not seem as free and fresh as one would like, but he rallied at the end to deliver some of the most Italianiate, Schipa-like (light and tastefully refined) vocalism heard in the War Memorial Opera House since the start of the 21st century. If only he could move as freely as Arwady, Stober, and Arteta.

In his San Francisco Opera debut, baritone Fabio Capitanucci produced fine, solid tones throughout the range that nonetheless lacked color. The voice was big, but his character never seemed to extend beyond the fringe of his robe. Tenor Joel Sorensen’s bright, somewhat whiney tenor made for an ideally annoying, feckless Dr. Caius, and the excellent tenor Greg Fedderly supplied a mildly amusing, if ultimately unmemorable Bardolfo.

More disappointing was the lack of humor and physical agility that bass Andrea Silvestrelli, the superb giant Fasolt in our recent Ring, brought to the comic role of Pistola. As a character, Meg Page seems perpetually in Alice’s shadow; mezzo-soprano and current Adler Fellow Renée Rapier sang her quite well, but never broke free enough to equal the wit and agility of Arteta and Arwady.

There are some high points to the direction, particularly the way Tambosi stages Ford and chorus as they descend upon the screen that hides, not the Falstaff they seek, but rather the cooing Nannetta and Fenton. Nonetheless, questions remain as to why Terfel seems far larger than his already large physical presence, but the women sometimes seem dwarfed by Schlössmann’s set. Add that to the challenge of Terfel’s interpretation, and you have a production to see again or (hopefully) ponder on video, if only to discover what more will evolve during the course of the run.