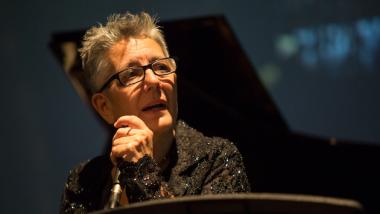 When the Roy and Edna Disney CalArts Theater (REDCAT) came into being as part of the Walt Disney Concert Hall complex, it was designed to serve two functions. It would provide a downtown venue for the Valencia campus where it could present a full season of music and dance concerts, theater events, film screenings, and gallery exhibits featuring artists from around the globe. It would also provide a showcase for performances that would feature the school’s students, faculty, and artists in residence.

On Feb. 17, diarist, poet, conceptual artist, and feminist composer Eve Beglarian culminated a two-week residency at CalArts with a concert at REDCAT. It featured 13 vignette-size compositions (and collaborative videos) performed by students and faculty members: Vicki Ray, Matt Barbier, Alison Bjorkedal, Meltem Ege, and Stuart Fox. Beglarian did not perform, and sat in the audience.

The succession of these pieces (none longer than 10 minutes) was like leafing through a scrapbook of Beglarian’s work, the program titled Play Like a Girl representing the latest installment of her on-going project, A Book of Days.

As described in the program, the overriding theme was “nasty women.” The works included pieces inspired by the civil disobedience of Rosa Parks and the Bangladeshi troublemaker/poet, Taslima Nasrin (the bus driver didn’t change his mind) and the political activism of Esther Hobbart Morris, who in 1870 became the first female judge in America (What Justice Looks Like).

I am really a very simple person and On the Battlefield (and their accompanying videos) were drawn from Beglarian’s voyage-of-discovery project, Brim, based on impressions she compiled over three months in 2009, when she kayaked and bicycled the entire length of the Mississippi River.

Musically and literarily, Beglarian is a hunter-gatherer of inspiration. And there is a John Cage element of chance in her work, which is often based on impressions, poems, musical themes, or emotional triggers that impact her on a given day.

Her compositions are sometimes literal, but more often dreamlike in the way musical structures combined with visual projections establish motifs that overlap and echo like wisps of vapor.

The first piece on the program, I will not be sad in this world, inspired by a traditional Armenian song, established the tone, combining electronic layering with folksong simplicity. Composed for solo flute (or the duduk, or in this case, the shakuhachi), it was played wistfully by Rachel Rudich. With poetic simplicity, the melodic lines from the shakuhachi were looped, layered, and dovetailed with prerecorded voice.

The moods of the pieces varied greatly, but at their core, they reflected the internal struggles confronted by the women who inspired them. A sense of hopeless resignation permeates Farther from the Heart (for piano and voice) set to a 1942 poem by Jane Bowles. “Oh, I’m sad for never knowing courage. And I’m sad for the stilling of fear.”

On the Battlefield (for trombone, video, and Beglarian’s pre-recorded voice) reflected a personal moment of emotional turmoil balanced against images of the Civil War battlements of Vicksburg.

It Happens Like This (for narrator, singer, guitar, and mandolin) provided a rare moment of surreal humor as Meltem Ege recited a poem by James Tate about a chance street encounter with a particularly precocious and endearing goat.

The final piece on the program, the bus driver didn’t change his mind, was provocative and musically the most interesting, as Beglarian interpolated the civil rights resistance of Rosa Parks with the poetry of Taslima Nasrin and bluesy ensemble that included piano, electric guitar, cello, percussion, bass, and particularly fine clarinet work by Phil O’Connor. Its vocal refrain of “keep going” really did not need to keep going and going and going.

The performance represented the culmination of Beglarian’s residency at CalArts. But ultimately the impact she had on the students during those two weeks was certainly more important.

The technology has been updated, but the music is faithful to the original recording.

REDCAT: The Magic Down Below

Los Angeles Philharmonic regulars and visitors might be unaware of it, but the best of L.A.’s adventurous contemporary arts scene is happening right beneath their feet.