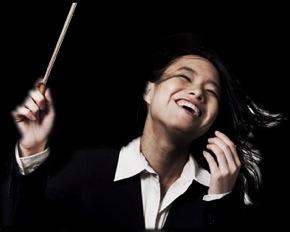 Symphony Silicon Valley has been engaged, more and more passionately over the last few seasons, in demonstrating to its audiences that recently composed music can be both substantive and enjoyable to listen to. (Just look at its previous program.) In its concert Saturday at the California Theatre, conducted by Carolyn Kuan, the agenda seemed to be to prove that new and newish music can be fun to watch, too.

The objects of our visual and auditory attention were two concertos, each less than 30 years old. The first and elder of these was Suite Punta del Este, a concerto for bandoneón by the late Argentine tango master Astor Piazzolla. Seth Asarnow, the leading local virtuoso on this instrument, the Argentine national button concertina, stood while playing, resting it — it looks rather like a large jewelry box with a bellows in the middle — on one raised knee.

Piazzolla was himself a bandoneónist, if that’s the word, and he knew how to make effective use of the instrument. Asarnow played nearly continuously throughout the piece: a cascade of brief rhythmic figures in the opening movement, a series of separated staccato notes later on, rich chordal melodies in the slow movement, an overlapping conversation with two solo violins in the finale. It became a bit hypnotic to watch the considerable bellows slowly expand and then quickly collapse for the next figure. An emergency backup bandoneón (fortunately not needed) sat at Asarnow’s feet.

The accompaniment was a chamber orchestra of some 20 players, strings and a few winds. This received little of the spotlight. Even the solo players hardly got a word to themselves. Fortunately, the bandoneón was strong and fluid enough to carry the weight of the piece on Asarnow’s knee. The music as a whole was genial, cogently written, and briskly presented, in a colorfully tonal modern idiom with perhaps a touch of the equally congenial Spanish composer Joaquín Rodrigo.

Our second concerto was written five years ago by Avner Dorman, a young Israeli-born composer with a vigorous neo-Baroque bent. It was titled Spices, Perfumes, Toxins!— exclamation mark included — and is for twin percussionists with full orchestra. The soloists, who roamed among their battery on the broad stage lip in front of the orchestra, were Galen Lemmon, SSV’s own principal percussionist, and Steve Hearn, best known here for his work with the Cabrillo Festival, at which he and Lemmon played this concerto two years ago. The bulk of their attention was devoted to two massive, five-octave marimbas, with extensive interjections on other mallet keyboard instruments — vibraphone and high-pitched bells — and a pair of drum kits, plus occasional notes from other small drums and a few additional odds and ends.

Despite the larger orchestra, this concerto was dominated by the percussion even more than Piazzolla’s had been by the bandoneón. The percussion was louder than the orchestra, especially when the drum kits were engaged, and its participation virtually never ceased. Hovering over their marimbas with two mallets in each hand, Lemmon and Hearn were attention-getting, energetic, and creative. The percussion-centered score put something of a damper on the orchestral part. The complex, taut rhythms were typical of Dorman’s music, but between the mellow marimba tone and the absence of strong orchestral interjections, the work lacked the muscularity of his characteristic style. Dorman was out for something different here, as there were hints of Middle Eastern folk music, of cool jazz, of rock music in the drum kits, and — wouldn’t you know it? — of Rodrigo concertos again. It was a very long piece, or it least it seemed a lot longer than the Piazzolla.

After intermission, the orchestra finally got a chance to attract our attention without distraction from colorful soloists, with Mendelssohn’s all-weather favorite, the “Italian” Symphony. The musicians played this as if they had taken a hint from the concertos. They delivered a bright, crisp performance, with the same kind of hard-edged figures as were featured in the concertos’ congenial modernism. On the podium Kuan appeared especially concerned with shaping the phrasing, which nicely balanced the crispness. Nothing sounded disjointed, and the quick processional of the Andante went particularly smoothly. The rest was generally fast, yet not excessively so. The Presto finale was lively without showing off. The playing was generally excellent, delivering a solid, satisfactory end to both the concert and the symphony’s season.