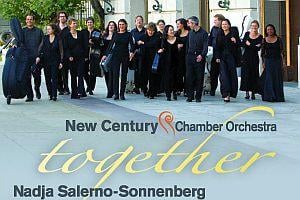 Jason Victor Serinus on July 27, 2009
Those of us who attended violinist Nadja Salerno-Sonnenberg’s opening concert as music director and concertmaster of the New Century Chamber Orchestra (NCCO) can hardly forget her bracing and authoritative playing. Nor could few miss the heart-warming camaraderie she generated with her fellow artists, and the ensemble’s infectious joie de vivre. While Salerno-Sonnenberg was and most definitely is a force to be reckoned with, the superb musicianship of her cohorts ensured that it was far more than her show.

All that and more is available to savor on Together, the first CD from the ensemble on Salerno-Sonnenberg’s four-year-old NSS Music label. Wonderfully recorded at Skywalker Studios, the close-miked blend brings to the fore all the color and nuance of these superb artists. Unless you were seated very close at one of their concerts, it is possible that you will hear even more of the ensemble’s tonal richness on a good soundsystem than you might from mid- or rear-hall.

That’s all for the best, because the repertoire on the CD is all about color, passion, and driving energy. Its centerpiece, Leonid Desyatnikov’s orchestral arrangement of Astor Piazzolla’s The Four Seasons of Buenos Aires, is a stunner. (Although Piazzolla never intended to arrange the four independent pieces into a single suite, the marriage works wonderfully.)

The opening movement, Primavera Porteña, begins with savage intensity. Salerno-Sonnenberg bites into the strings as a lioness might her kill. In this case, however, the music lives on, vibrant and urgent. There’s a dark, almost dangerous sensuality stalking through the four movements, beckoning, compelling, and ultimately seducing with its passion. This is not to say that there is no room for soulful yearning, as heard in the middle of the third movement, Invierno Porteño, but its judiciously judged sentimentality never becomes maudlin or self-absorbed. Very different than the recently issued performance by Trio Solisti, NCCO’s rendition of The Four Seasons of Buenos Aires immediately establishes them as a world-class ensemble.

It’s good to have a recording of the NCCO’s season opener, resident composer Clarice Assad’s fine Impressions: Suite for Chamber Orchestra. Its opening theme is quite inviting, allowing more room to breathe than Piazzolla’s full-throttle assault. After the captivating second movement’s Danca Brasileira, with its echoes of Assad’s homeland, the middle movement’s lovely Slow Waltz contrasts with is grace. There’s lots of zippy energy in the challenging fourth movement Perpetual Motion, which Assad wrote to showcase what she calls in the liner notes the NCCO’s “flawless proficiency and impeccable artistry.” I couldn’t agree more.

After Béla Bartók’s familiar Romanian Folk Dances, in which Salerno-Sonnenberg cedes two of her solos to cellist Susan Babini and violist Anna Kruger, the concert ends with a delightful “encore,” Dave Rimelis’ supremely dreamy arrangement of the Gershwins' “Bess, You Is My Woman Now” from Porgy and Bess. It may not capture the drama of the opera as a whole, but it’s irresistible. For anyone who thinks Salerno-Sonnenberg can only slash and burn, the sheer loveliness of her Gershwin playing declares otherwise. It’s a wonderful bon-bon end to a marvelous CD that should help propel the NCCO into the national spotlight.