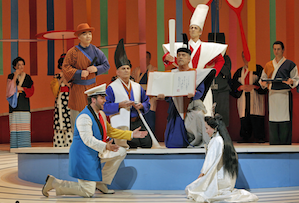 The Tragedy of Butterfly

Two tragedies unfolded on the stage of San Francisco’s War Memorial Opera House on Sunday afternoon. The first was the story and music of Puccini’s Madama Butterfly, whose title character soprano Patricia Racette has in her blood.

Reprising, for the third time in eight years, what has become one of her signature roles, Racette presented such a thoroughly conceived and deeply felt Cio-Cio San (Butterfly) that it was hard to tell where her own character left off and Butterfly’s took over. Every facial expression and gesture, and the shape of virtually every vocal line bespoke a starry-eyed 15-year-old who had already tasted great tragedy, and was destined to follow in her father’s footsteps and kill herself three years later.

The other tragedy involved what has happened to Racette’s voice over the last decade. Sixteen years after winning the Richard Tucker Award, the 49-year old artist’s vibrato has widened to such an extent that, during Butterfly’s exquisite entrance aria, she sounded anything but young and fresh. In all fairness, her singing was far more of one piece in the second act. Nonetheless, while she is still able to soften and sweeten in her middle range, once she begins the ascent to the top, her vibrato loosens, and the sound becomes harsh and borderline shrill.

It is possible to forgive Racette’s vocal decline, as did the opening matinee audience when it rose, almost unanimously to its feet to cheer one of our city’s most beloved artists. Yet, while cheering the triumphant totality of her heart-rending portrayal, it was hard to suppress the sad awareness that Racette’s days of singing young, fresh characters are fast coming to an end.

To stick to the triumphs, a main reason for revisiting Butterfly, beyond its box office draw and Racette’s availability, was the opportunity to enjoy the conceptual and decorative genius of Production Designer Jun Kaneko, whose animated Die Zauberflöte (The Magic Flute) was an unqualified hit in 2012.

Kaneko did not disappoint. Although some of his marvelously colorful and oft-droll costuming contradicted the tragedy, the manner in which he maintained interest during long orchestral interludes, and drained the set of color at the opera’s terrible end, were deeply inspired.

Inspiration was shared by two other individuals: Maestro Nicola Luisotti, who conducts our superb San Francisco Opera Orchestra in all but the final two performances, and debut director Leslie Swackhamer. Luisotti, who estimates in the program book that he has conducted Madama Butterfly over 70 times, may see Cio-Cio San as “not very bright … delusional and really a little crazy,” but he honors her every note.

Embracing Racette and her colleagues as Butterfly in turn embraced her 2-year-old child (the adorable Miles Sperske), Luisotti caressed the score magnificently. Special mention must be made of the final act’s Humming Chorus, in which Luisotti allowed Ian Robertson’s perfectly steady and beautifully voiced singers time to immerse themselves in one of Puccini’s most unforgettable melodies while Kaneko’s magic unfolded onstage.

One of Swackhamer’s most individual touches was making the despicable marriage broker Goro into something of a clown. Fully exploiting debut tenor Julius Ahn’s limber physicality, as well as the silly fedora Kaneko stuck on his head, she softened his presence. Another inspired idea, was to employ four black-shrouded “stagehands” whose garb became metaphoric in the end.

Brian Mulligan, who sings American Consul Sharpless, has always been a warm and beautifully voiced singer, but here, that warmth communicated his character’s soulful understanding Butterfly’s plight in a manner overlooked by many other artists. Save for Racette, his was the most potent and moving portrayal of the production.

If Mulligan’s sympathy for Butterfly projected more fully than that of mezzo-soprano Elizabeth DeShong, who sings Butterfly’s servant, Suzuki, that is not to say that she did not sing wonderfully. But the voice and face of tears communicated so clearly to the last row of the balcony belonged solely to Butterfly. In the opening matinee, Suzuki’s frustration with Butterfly came through stronger that her pain.

As Lt. B.F. Pinkerton, the enamored American sea captain who callously takes Cio-Cio San as his bride, and then discards her as one might a used toy, tenor Brian Jagde jerked through Puccini’s vocal line with a surfeit of blustery accents and bursts of energy. The voice itself was quite fine — strong, solid, and filled with spirit — but the lack of legato and grace did Puccini’s writing no favors. We’re not supposed to love Pinkerton, but he doesn’t have to throw notes around to make us sour on his clueless, imperialistic presence.

Two singers must be singled out in smaller roles. Bass Morris Robinson, who presents a magnificent Joe in SFO’s concurrent production of Showboat, sang the Bonze wonderfully. Ditto for baritone and first-year Adler Fellow Efraín Solis, who, with Swackhamer’s help, created, not a stick figure Prince Yamadori, but rather a beautifully voiced and ultimately defeated suitor whose heart opened when Sharpless alerted him to the tragedy that was about to unfold.

While it may seem an overproduced warhorse, as soon as the curtain rose on the final act, and the magnificence of Racette, Kaneko, and Luisotti’s conception transcended the soprano’s vocal decline, it was clear witness to the art of opera at its finest.