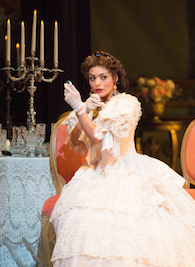 What better relief from the Bay Area stadium wars than the discovery of a fresh, winning team that hits it out of the ballpark? That’s exactly what SFO General Manager David Gockley gave us on July 4th weekend — a chilled crowd of 26,000 opera lovers at AT&T Park and a near-capacity audience in the War Memorial Opera House cheered as a new cast breathed desperately needed life into Verdi’s La traviata.

The star of the evening was Pérez. She may not be a born coloratura — her first act cabaletta, “Sempre libera” (Always free), was labored — but her allure and ability to give herself over, body and soul, to Verdi’s doomed heroine were so complete that it was hard to take eyes off her. Although her voice was edgy in the first act, and her interpretation of the final Act’s heartbreaking “Addio del passato” (Farewell to the past), far too derivative, her pain was so palpable, and her conviction so moving that Violetta became real before our eyes. With her voice warming as Violetta’s tragedy unfolded, Pérez’ reprise of a role she first sang here five years ago confirmed her artistic maturity.

With her voice warming as Violetta’s tragedy unfolded, Pérez’ reprise of a role she first sang here five years ago confirmed her artistic maturity.

Costello, who sang so movingly in SFO’s world premiere of Jake Heggie’s Moby Dick, lacks the essential vocal brilliance, ping, and freedom on top that mark an ideal Verdi tenor. In Act 1, for example, his role in the famed ensemble drinking song, “Libiamo ne' lieti calici” (Let’s drink from the joyous glasses), fell flat, and his “De' miei bollenti spiriti” (My passionate spirit) lacked buoyancy and, yes, spirit. He would have been wise to have cut his Act 1 cabaletta since he, like his wife, lacks the climactic high note that would have transformed an otherwise labored performance. Throughout the opera, his voice grew pallid higher in the range, and failed to pierce the heart.

Nonetheless, Costello’s ability to sing ardently and embody passion must have scored mightily on the big screen. When his Alfredo gazed upon Violetta with starry-eyed, puppy dog innocence and approached her as if nothing else mattered, it was possible to momentarily ignore the fact that, with Verdi, he may be pushing his voice beyond its natural limits.

Kelsey’s contribution as the tragedy-inducing father, Giorgio Germont, was a gift. Replacing the stolid, one-dimensional Vladimir Stoyanov, Kelsey provided the beauty and warmth essential to create a believable father who ultimately begs for forgiveness. Moderately throaty lower in the range, his instrument sings with uncommon freedom and beauty as it soars to an easy and open top. The ardor and love he projected in his aria, “Di Provenza il mar” (Who erased the sea, the land of Provence from your heart?), made his well-timed violent outburst so shocking that many in the audience audibly gasped.

What SFO’s second cast needed was conducting on the level of Music Director Nicola Luisotti’s, who made all the difference in the first six performances. Resident Conductor Giuseppe Finzi may have set apt tempos for his singers, but he was unable to inspire the San Francisco Opera Orchestra to Luisotti’s level of nuanced excellence. His treatment undoubtedly found favor with those who wish genius would contain itself and resist probing beyond the routine.

Some critics and audience members have expressed weariness with this sixth go around of John Copley’s 1987 production. I, however, find it quite effective. The red, orange, amber, and browns of Flora’s parlor are especially appealing, and David Walker’s costumes are right on the mark.

Harder to get a handle on is Laurie Feldman’s direction. The same scenes where action seemed stilted with the first cast caught fire this time around. Violetta’s final collapse may have seemed ill timed, but virtually everything that preceded it was gripping.