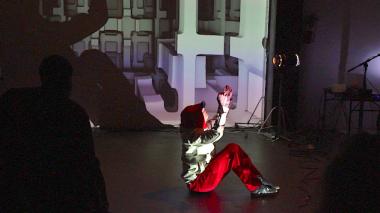 The conceit of San Francisco Fresh Festival’s Exchange Series is to spark interdisciplinary collaboration between movement, visual, and sound artists in an experimental setting. After a mere five hours of rehearsal, electroacoustic maven Pamela Z and French-born dancer Christine Bonansea delivered a suite of solos, duets, and improvisation that was virtuosic, enthralling, and profoundly touching. In the informal post-concert roundtable, Z and Bonansea told us they had collaborated before, but never on such a large-scale project. Traces of their previous collaborations, such as readings in French by Bonansea recorded and turned into fixed media by Z, appeared throughout the evening, but the freshness and enthusiasm they brought to weaving a piece specifically for the austerely inspiring openness of Space 124 at Project Artaud was palpable throughout the 45-minute performance.

One thematic aspect of their work was the blurring of physical and sonic confines. The piece began with Bonansea, wearing a red and white hooded tracksuit, sitting inconspicuously in the front row, right by a video projector. I initially assumed she was just another audience member, and didn’t immediately notice her getting up and begin prowling amidst the chairs, arranged in clusters around the performance space. Her movement was tense, vaguely confrontational; soon she started getting closer to audience members, sometimes fitting between adjacent chairs, other times sitting on someone’s lap almost as if they weren’t there. In the meantime, Z was weaving a live-looped tapestry of vocalisms and pre-recorded samples, which she manipulated with a combination of infrared, ultrasound, and wearable sensors. As she triggered, stopped, stretched, and scrambled bits of audio, Z took on the role of a puppeteer, deliberately tugging invisible strings to obvious aural consequences. There another boundary was crossed, as Bonansea’s movement began acknowledging the sonic results of Z’s gestures, to the point where Z’s invisible strings seemed to be tugging at the dancer herself.

Over time, this invasive and controlling affect gave way to a more playful one; Bonansea shed some of her clothes, and Z seemed to play more collaborative than directing roles. Even when the musician was capturing and looping glitchy bits of videos of the dancers (using what they jokingly dubbed the “Christine Cam”), the resulting effect was more humorous than chilling, due to Bonansea’s sometimes comical facial expressions, as well as the free, exuberant solo she executed using the videos as accompaniment — a beautiful intermedia counterpart to Z’s typical looping practice. At one point, Bonansea disappeared behind a curtain, opposite to Z’s laptop station; unbeknownst to all but the most observant audience members, she was climbing an out-of-sight ladder, and eventually revealed herself by poking out now a leg, now an arm, now a mugging face, some 25 feet up in the air.

From a musical standpoint, Z’s performance was a virtuosic showcase of vocal range, timbral beauty, and electronic control. There were no hiccups, no technical snags, not even the hint of a slightly mistimed loop. An especially compelling quality of Z’s delivery is her ability to differentiate her looped parts through different registers, timbres, characters, and languages, effectively creating layers of identity as well as clarity of texture.

The arc of Z and Bonansea’s suite ended in warmth: the dancer came to lie on the floor, using a bunch of her discarded clothes as a makeshift pillow. Z came to sit by her gently, and signaled for the music to fade. Two women on a stage, challenging and supporting one another, all the while blowing our collective minds.

At the Center for New Music the duo display remarkable attunement and intoxicating command, drawing the audience into a state of utter wonder.