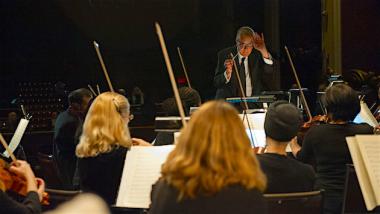 Composers, a music professor once explained, fall into two camps: there are those who agonize over their irregular creative ability, succumbing to long dry spells and relying on bursts of unwilled inspiration to produce each next work (or even, as the case may be, note). Then there are those who, in his words, “simply turn the faucet on.” He had the humility to assign his own composing work to the first category, while as the paradigmatic example of the latter, he offered Dmitri Shostakovich, who went some way toward proving the accuracy of this analysis when in 1925, at the age of 19, he premiered — as a conservatory graduation piece — a mature, full-scale symphony, which immediately joined the standard repertoire of the time.

A quarter century earlier, another composer few would presume not to place in the “faucet” group, Shostakovich’s elder countryman Rachmaninoff, had premiered his own first symphonic work to disaster. By all accounts the conductor butchered the score and Rachmaninoff apparently spending the evening covering his ears somewhere on the staircase. It took three years and a bout with alcoholism for Rachmaninoff to recover and finally return with his second piano concerto.

Vallejo Symphony’s Sunday afternoon program presented two case studies in confidence, then: the vigorous, first major statement by a prodigy and the stepping back into the ring of an almost fatally wounded ego. By the century-long reckoning of public opinion, one could hardly wish to do better for a comeback than the Rachmaninoff concerto. I must confess that the concerto is played, heard, clipped, and copied so ubiquitously these days that its lush textures produce less magic for me than they should, unless the interpretation offers cause for surprise or real astonishment. Vallejo’s take engaged and impressed only sporadically.

Soloist David Fung feasted on the opportunities for virtuosity, especially the fast ones, and his percussive rendering of the recapitulation of the first movement interestingly highlighted the 20th-century side of this composer who so clung to the 19th. Still, the balance between the soloist and orchestra swung occasionally toward a muddle, and while the performers offered plentiful flashes of power and depth, consistency eluded them.

Shostakovich’s No. 1 benefited from its relatively less-exhausted content — it’s not quite the go-to it was in the pre-war period — and Marc Taddei led the orchestra in at least one moment of true perfection, despite a fuzzy throughline in some of the rapidly changing textures. Taddei perceptively described the Shostakovich as “madcap” before the show, and he speculated that Shostakovich was influenced by the hairpin rescues and reversals of silent films, for which Shostakovich was moonlighting as accompanist.

The listener certainly gets the idea when treated to some of the quick, flippant musical conversations in the piece, and there’s even a clear joke or two. The symphony as a whole, however, is hardly light: The screw-tightening harmonies and cold bombast of classic Shostakovich already show up in spades, although the orchestration is far more modest than would later become his norm. At times the piece almost feels like a grab bag of idioms.

The Vallejo Symphony’s performance had a bit of the grab bag to it as well: communication among the players and timing and pitch of entrances sometimes tripped and stumbled, but they never allowed themselves to fall, and produced a few excellent passages. The Symphony milked almost all of the slow and medium-tempo music gratifyingly and the undisputed highlight of the entire evening came when Taddei boldly shaped the end of the Lento - Largo movement into a hollowing deconstruction of the material presented earlier. This intention manifests on some level in the notes that Shostakovich put on the page, of course, but I’d never heard it the way I’m now convinced it should be heard until Sunday. Surely that alone constitutes reason enough to return to the Empress Theatre.

The orchestra pins its hopes on the New Zealand conductor to lift them to the next level.

Faced with a declining budget and faced with dwindling audiences, will the board's decision to fire the music director and bring in fresh blood be the answer for the Vallejo Symphony?