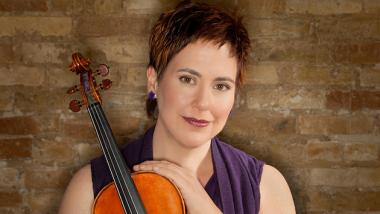 Though superficially perverse, the Marin Symphony’s choice of Sunday afternoon program actually made for a rewarding and intellectually stimulating pairing. Music Director Alasdair Neale’s decided to program the florid, pathetic twistings and yearnings of Tchaikovsky’s Violin Concerto as a prelude to Shostakovich’s Symphony No. 10 — a gargantuan work of bleakness and coldly apprehended terror. The performers, including discerning soloist Dylana Jenson on the Tchaikovsky, executed both challenging pieces with precision, finesse, and commitment.

At first glance, they seem to have very little in common beyond the country of origin. The Shostakovich inhabits a narrow milieu of frequently played works, which nonetheless never grow more easily inviting over the years. A lot of pieces that thrive in the repertoire despite being considered “dark”, “violent”, or “difficult” by popular consensus — the canonical Stravinsky ballets, for example — tend to offer their heterodoxy in clear, bold colors of surprise and iconoclasm — 10 pitches in one chord!

Symphony No. 10, however, offers little in the way of self-conscious ruptures of expected patterns. It carves out its special provocation in subtler ways: steadfastly refusing to develop a theme that seems so ripe for it or insisting one instrument take a part which seems tailor-made for another.

Few would use gloomy or bracing adjectives to describe any of the Tchaikovsky, and yet the concerto, which sounds so emblematic of violin pyrotechnics to our ears, provoked scorn and dismissal initially. Despite the traditionally legato writing in the middle Canzonetta: Andante, beautifully drawn on Sunday by soloist Dylana Jenson, passages of sharp, repetitive, and percussive statements in both outer fast movements drew condemnation from violinists and conductors as harsh, ugly, and unsuited to the instrument. Herein lies the unexpected parallel with the Shostakovich: both works intentionally “underutilize” the traditional performing strengths of the instruments at hand — the violin for Tchaikovsky, and the orchestra for Shostakovich.

Jenson torched spectacularly through every movement and especially impressed in the first movement’s cadenza. Usually this very long, specifically notated solo grates on me in comparison with the rest of the work embodying the height of gratuitousness. Yet Jenson varied the pace and emphasized the harmonies so successfully she transformed the racing scales from etude tests of prowess to supporting ornaments for the returning theme. That conductor’s ear for best emphasis can easily fall by the wayside for a performer when given three or four minutes to go wild — happily not so on Sunday.

While most contemporary listeners will find nothing un-violinlike or discomfiting about the Violin Concerto, most will still wriggle and strain in some way during Shostakovich’s mammoth Tenth Symphony. Just as 19th-century critics thought “why does the violinist keep pounding out those static fusillades? why not play it like a violin?”, the Shostakovich might evoke questions like “how many blasted times will they repeat that ominous little motif?” and “why isn’t a resolution ever coming?” That sense of underutilization — Shostakovich deploys this enormous orchestra and yet insists so frequently on isolated, undeveloped ideas — points to the stunning achievement of the piece: the portrait of stasis and monumental immovability within the most change-bound realm of art.

Performers sometimes seek to round off the corners of challenging statements such as this, speeding up a passage that becomes excruciating if truly played adagio, for example. Alasdair Neale and the Marin Symphony avoided this temptation admirably. The unincorporated horn calls made no attempt to integrate, the piercing high string jabs grew no quieter or more subdued as the long work continued, and the scherzo thundered past at about the quickest tempo feasible. The orchestra excelled and enraptured throughout. My neighbor in the audience jumped when the Scherzo started, and the final glissando string flitter dripped a tingle down my spine.

The North Bay orchestra demonstrates why it should be on any music-lover’s radar.

SFCV talks to the conductor about his time with the Marin Symphony and his vision for the future.