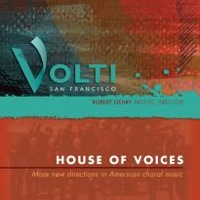 Venturing Out With Volti

Looking for the mellifluous works of Morten Lauridsen? The songs of Eric Whitacre? Melodies of John Rutter? Harmonies of Robert Chilcott? Mystical minimalism of Arvo Pärt?

You won’t find any of that here. What you will find in Volti’s House of Voices is a well-chosen program of unaccompanied choral music by emerging and established composers that is challenging, stimulating, and always intriguing. The compositions may not be hummable but they’re certainly accessible with timbres, harmonies, and textures that will draw you back for repeated hearings.

Volti is an ensemble of 20 singers that specializes in performing imaginative new vocal music, addressing timely issues through music, and commissioning innovative pieces by American composers (five of the six pieces on this disc were recent commissions or co-commissions). Founded and conducted by Artistic Director Robert Geary, Volti has built a repertoire that often employs microtonal music and extended vocal techniques, such as fragmented texts, sounds based on vowels and consonants, and nonsung vocal sounds.

The first tracks on the disc — two poems by Poet Laureate Billy Collins set to music by Yu-Hui Chang — don’t stray far from listeners’ comfort zones. Chang’s goal was “to retain the clarity and the narrative nature of Mr. Collin’s writing,” and she accomplishes that musically. The first section is rhythmically driven and somewhat jazzy, with minimal vocal or text manipulation. The contrasting, atmospheric second section employs greater wordplay and dissonance yet still follows the narrative in a clear, straightforward manner.

Ted Hearne’s five-movement Privilege uses a larger number of extended techniques and is one of the disc’s highlights. During the first movement, Hearne turns part of the text into a Klangfarbenmelodie (Schoenberg’s technique for dividing a musical line or melody among several instruments instead of assigning it to one instrument). He continues the wordplay in the second movement and adds some quiet contrasts to the third. The rhythmic fourth movement is followed by a lyrical fifth that practically turns into a spiritual before finally disintegrating into complete disharmony.

Daglarym/My Mountains, by Donald Crockett, combines words and melodic fragments from the folk music of the Asian country of Tuva, as well as close harmonies and a variety of timbres, to create an unconventional soundscape that reflects the nomadic nature of the text. The use of repeated words throughout the piece adds to the enjoyment and helps listeners by providing both familiarity and a sense of structure.

Lose yourself in the sounds of new music performed by a choir that undoubtedly is the finest collection of new music singers we have.

Eric Moe, whose music — along with that of Mark Winges — appears on Volti’s first CD, bases his composition on an intriguing poem by Matthea Harvey. The composer describes the poem as “a simultaneously funny and profound look at contemporary culture [and] our attempts to externalize ‘bad’ feelings and emotions.” The text is difficult to follow just by listening (unlike the Billy Collins settings), though the dense, tightly woven music invites further listening, as do composer Wayne Peterson’s settings of Two Poems of Delmore Schwartz earlier on the disc.

The final piece is also the most adventuresome. Composed by Winges for adult and children’s chorus, here performed by Volti and members of the excellent Piedmont East Bay Children’s Choir, Winges explains that “Having the expanded forces of two choirs allowed for more dramatic contrasts in sound: treble voices alone, mixed voices alone, younger treble voices with men, a multi-hued treble sound (using both adult and younger sopranos and altos as a unit), and of course, the full sound of both choirs together. The way these different forces are used and where they occur in the piece is a part of the unfolding drama of the music.” During live performances, listeners can observe how additional contrasts are accomplished by having singers face toward or away from the audience. The results are striking vocal textures that, to paraphrase Winges, will open listeners’ ears to new possibilities in choral sound.

This is extremely difficult music to sing, especially a cappella, and the performances are impeccable. Another SFCV reviewer described Volti as “possibly the finest collection of chamber singers in the country.” So familiarize yourself with the texts, close your eyes, open your ears, and lose yourself in the sounds of new music performed by a choir that undoubtedly is the finest collection of new music singers we have.

Notes and texts are included.