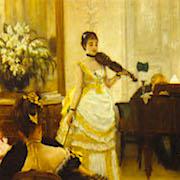 What do Felix Mendelssohn’s great aunt, a countess, a princess, a musical prodigy, a gifted female composer, and an heir to the Singer Sewing Machine fortune have in common? They were all 19th-century salonnières — extraordinary women whose influential salons promoted the reputations of composers like Bach, Faure, Ravel, Liszt, and Stravinsky. The salonnières held events in their homes that brought together great performers, composers, and thinkers, and helped shape the musical taste of 19th-century Europe.

Six of these patrons are being celebrated during the Valley of the Moon’s Music Festival Salonnières: Women of Power and Influence, July 14–28 at the Hanna Center Auditorium in Sonoma. It’s an opportunity to hear the music on instruments the music was originally written for and enjoy food and (of course) wine in scenic vineyard settings.

“Mozart, Beethoven, and Brahms never heard their music played on a modern concert grand piano, or on string instruments with nylon or metal strings. We highlight the unique and intimate sound of music played on historical pianos and gut strings … the sound is more natural, delicate, and has a subtlety almost impossible to achieve on modern instruments.”

Tomkins says the tribute to salonnières evolved because “It’s a cool way to look back at history … to applaud the role of women in society and their imagination and determination. These weren’t women who were oppressed; their salons were progressive and invited integration.”

When planning a program Tomkins likes to use “an overarching theme that puts things in as much context as possible so listeners can enjoy the music with a deeper understanding.” To support this approach, the concert series includes three free lectures with audience discussions that will put the role of 19th-century salons into perspective.

In addition to sponsoring and promoting composers and artists in a variety fields, all of these salonnières were talented artists themselves. Winnaretta Singer was the 20th of 24 children fathered by Isaac Merritt Singer, inventor of the modern sewing machine. For over 50 years Singer, an accomplished pianist and painter, hosted a famous salon that made her Paris home a progressive gathering place for almost everyone who was anyone in the arts. Singer was a major supporter of Gabriel Fauré and commissioned and premiered compositions by many other composers including Erik Satie, Igor Stravinsky, Manuel de Falla, and Francis Poulenc.

Other prominent salons were curated by the Countess Maria Wilhelmine von Thun, a skilled harpsichordist who promoted Beethoven and was responsible for Mozart’s first great success in Vienna; musical prodigy Clara Schumann, who championed the music of Brahms, Chopin, and her husband Robert; and Fanny Mendelssohn, whose hundreds of compositions weren’t  performed in public because her male dominated society wouldn’t support it, but who hosted a private concert series where she played her compositions and performed with her brother Felix.

Sara Levy, a great aunt of Felix Mendelssohn, played a major role in shaping the cultural world of Berlin by creating a salon where everyone, no matter what their religion or societal background, could gather and bond over artistic experiences. She played harpsichord and fortepiano and began a J.S. Bach revival as a result of commissioning works from his two eldest sons, Wilhelm Friedemann and Carl Philip Emmanuel Bach. And Princess Cristina Trivulzio di Belgiojoso, an Italian noblewoman and writer, ran a successful salon out of her Paris home where Franz Liszt, Gioacchino Rossini, and Vincenzo Bellini were among the distinguished participants.

The pieces planned for the festival are by the composers promoted by the salonnières and are played by experts in historically informed performance, featuring renowned violinist Rachel Barton Pine. Highlights include compositions by Ernest Chausson and Stravinsky, the Brahms Sextet in B-flat, the Beethoven Clarinet Trio, a concert of little-known Liszt songs, and a free performance of Fanny Mendelssohn’s Piano Quartet played by emerging professional musicians from the festival’s apprenticeship program.

There’s more to enjoy besides the music: receptions with the artists, receptions in local vineyards, post-concert dinners, special events, and picnics on the patio. “We have a local winery join us so there’s wine after every concert,” says Tomkins. “Also, there are wonderful people in the Sonoma community who open their houses to musicians and really share their homes and gardens and food while the Festival is going on, so it’s a beautiful extension.”

Why do we need another festival? Tomkins responds: “There’s a lot going on that’s causing people to struggle. One way we can help ourselves is by having a festival because that’s one of the most beautiful offerings we can make as people. It’s something to live for, to fight for, that humans are capable of this great beauty and touching people’s hearts. It forms a community that’s positive and has good energy so the more of these kinds of things we have in the world the better. I don’t think there can be enough good.”

The founders of the festival talk about its inception, the apprenticeship program, and why someone would have to be crazy to not want to visit Sonoma.

Schoenberg on gut strings and a run of 19th-century composers, heard on instruments of their time.

The well-curated 2016 program adds voices to the mix of period instruments.

Venturing Out With Volti