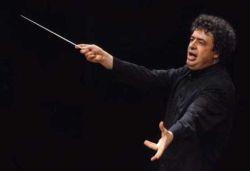 The Vienna Philharmonic left nothing behind in its final performance at Zellerbach Hall Sunday. Confronting head-on the scouring depths, seizing frenzies, aching tenderness, and long vaulted arcs of Gustav Mahler’s Symphony No. 6 in A Minor, “Tragic,” the orchestra concluded its first visit to the Bay Area since 1987 with a vital and febrile account of this great work. The concert concluded a three-day Berkeley engagement presented by Cal Performances.

Right from the start, the impact was forceful and brusque. Conductor Semyon Bychkov sent his players striding into the symphony’s opening theme with a stamping, remorseless intensity. The cellos sounded armed for combat. The brasses cried out in warning. A wall of sound, like that of an approaching army, advanced into the hall.

If there was concern that Bychkov might create a series of dramatic or overblown effects at the expense of the whole, the 90 minutes of deep-grained music that followed dispelled it. His reading took the long view, building from that early assault to an excavation of what the composer called, after a final rehearsal of the piece in 1906, “the cruelties I’ve suffered and the pains I’ve felt.” It’s hard to imagine a performance more thoroughly, cathartically “tragic” than this one.

The Scherzo had a glowering low center of gravity, eschewing the kind of raucous lilt this movement often gets. The moments of stark discord and even ugliness stood out more sharply and tellingly in relief. The Andante opened into a lustrous and layered solemnity, the strings gleaming darkly, the English horn keening inconsolably to itself.

It all led inexorably toward the coruscating Finale. Here, with almost alarming candor, Bychkov and his players made us feel what Mahler must have felt during his bleakest hours. The storm clouds massed. Shafts of sunlight pierced through and vanished. The foreboding doom was inescapable. Concertmaster Rainer Küchl offering a wistful, futile plea. The percussion hammer blows and rhythmic death knells landed again and again, ever more decisively. The end came with a kind of animal ferocity, frightening and thrilling to witness.

Greatness in Conflict With Itself

Not all of this was clear or ideally executed as it unfolded. Without much in the way of pliancy, playfulness, or dynamic flexibility, the opening Allegro came off with a single-mindedness verging on the claustrophobic. A trumpet misfired. Some entrances, here and elsewhere, were wooly and imprecise. The woodwinds trilled as if in resignation rather than pert defiance. But then the amazing, three-dimensional solidity of sound this orchestra can generate took over, reclaiming the territory.

A listener familiar with the piece felt similarly challenged throughout the afternoon. Why the sometimes deliberate, even leaden tempos in the Scherzo? So that we would feel it more keenly when the woodwinds let loose in honking mockery or the basses labored, as if against a terrible weight, in their lowest register. And why not a more ravishing lush sound in the expansive Adagio? So that we would attend to depths rather than shining surfaces, to the complexity of experience rather than its passing consolations. Even the movement’s famous cowbells had a clanking authenticity, as if there were real cattle in the distance, wearily climbing a hill.

Bychkov and the Vienna Philharmonic accomplished what only a truly great live performance can. They redrew the map of Mahler’s Sixth, closing off certain well-traveled stretches and pushing out the borders elsewhere, opening new vistas. It was far from flawless, which is entirely fitting for a work that simply can’t be mastered and contained.

One of the world’s great orchestras demonstrated irrefutably that greatness is never something finished or polished or rounded off. It’s always, at some level, in conflict with itself, unsettled, uneasy, raising new questions that have no clear answers.