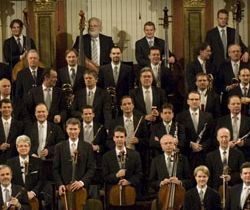 The Vienna Philharmonic began its Berkeley residency, presented by Cal Performances, with a concert at Zellerbach Hall on Friday designed to show off its versatility. The three composers, all from within Vienna’s cultural orbit, spanned a period of approximately a century, and each was aesthetically different from the others: high Classicism from Franz Schubert, wallowing Romanticism from Richard Wagner, and violent modernism from Béla Bartók.

Semyon Bychkov conducted. It was easy to hear why the Philharmonic — a self-governing organization that invites its own choice of guest conductor for every concert it gives — chose this dynamic Russian to lead it on this visit. Bychkov is known for his ruthlessly driving Shostakovich. He doesn’t conduct German music like that, though. Not only does he have a conception of how these works differ from Russian music, and from each other, but he’s also able to implement that conception. His bounding energy was both plentiful and husbanded, and differently so in each work.

Schubert’s Symphony No. 2 possessed enough raw spirit to remind the listener that it was written when Beethoven’s brash and muscular Symphony No. 8 was the new thing. Sudden fortes jumped out, especially in the finale. This was nicely balanced by genial coasting with great good humor through other parts, especially the scherzo’s trio and some of the variations in the slow movement. Little touches of dynamic flow, of sforzandos and echoing fades, further enlivened the piece.

The lushly romantic Prelude and “Liebestod” from Wagner’s Tristan und Isolde was more than casually spellbinding. The Prelude throbbed with rich string counterpoint. Bychkov began the “Liebestod” slowly and with caution, and then added just a touch of lightness and speed, allowing the piece to build up in the true Wagnerian way. When the climax finally arrived, with previously aborted cadences tumbling through to completion, Bychkov emphasized brief, heavy ritardandos, stepping on the brakes to keep the emotional intensity under control.

As for the Bartók, what makes the mandarin in his Miraculous Mandarin miraculous is that, like Rasputin, he’s so difficult to kill. Attempts by thugs to seduce, rob, and bump off this character take up most of the scenario of this scandalous (for 1926) ballet, and Bartók’s music matches the plot’s violence and seductiveness. Although it would have been nice for listeners to gain a better idea of exactly what was going on, moment by moment, as the orchestra played the work, it was certainly captivating and vigorous enough.

The Sweetness Is in the Sound

Audiences don’t go to Vienna Philharmonic concerts for the conducting, though, however excellent it may be. They don’t attend, either, to witness technical virtuosity of the kind American orchestras are noted for. Crisp initial attacks are not the Philharmonic members’ specialty, yet when they’re necessary — as in the chase scene forming the climax of The Miraculous Mandarin — they do quite well enough at tight, complex precision.

Rather, the particular and unique virtue of the Vienna Philharmonic is its sound. It’s unlike anything homegrown around here, and it’s worth traveling six thousand miles to hear; fortunately for Berkeley, this time the sound did the traveling. The particular construction of Viennese wind and brass instruments (as one audience member behind me said during a break, “That’s not a French horn, it’s a Viennese horn”), and the orchestra’s particular playing styles, are considered treasured traditions, handed down over generations of performers. Philharmonic President Clemens Hellsberg, in his preconcert talk, referred to the challenge of maintaining this unique sound while “meeting expectations of changing times,” a delicate reference to the call to include more women (a couple could be seen in the back amid all the male faces) and players of a wider variety of ethnic origins in the orchestra.

Regardless of what should be done about that, the Philharmonic is a remarkable instrument, whose qualities are worth preserving somehow. Start with the strings, which dominated the sound down in the pit of Zellerbach’s main floor. Each section has its own distinct tone. The first violins are light, yet firm and never shrill. The second violins are drier, and the violas have just the slightest touch of burr. The cellos jump out from the back — for the orchestra is seated in the European fashion, with the violins arranged antiphonally in front, and the lower strings behind them — with an incomparable warmth and solidity. The contrapuntal interweaving, as in Wagner’s “Prelude,” was of great clarity and ever-shifting beauty. Even more remarkable was the strings’ ability to play quietly. In passages calling for a soft accompanying rustle, as in Schubert’s trio, all the instruments in a section would be playing, though with such lightness that they sounded like only one or two players in a chamber setting. So that’s the Viennese sound!

While Vienna’s string sections sounded unusually diverse, the winds were unusually unified. Flutes, oboes, clarinets, and bassoons don’t normally sound much alike, but they do in Vienna. The oboe that takes the first variation in Schubert’s Andante was unlike any American oboe: smooth as well as fluent, lacking any sourness, it sounded like a cross between a recorder (the instrument popular in the Renaissance) and a clarinet. And the clarinet that takes the seduction scenes in Bartók, played by Matthias Schorn, was deeply echoing, as well as vividly expressive.

To hear the same richness and intimacy from Schubert and Wagner applied to Bartók’s often deliberately ugly score was to be steeped in paradox. What the strings played, I can only describe as a smooth harshness. The weird buzz of the second violins’ swirling accompaniment of the opening honking of auto horns (bass trombone for the horns) illustrates this: It was at once rough and sumptuous.

After each work, Bychkov turned around, smiling, to face the audience as he and the musicians basked in applause. For encores, Dvořák’s gracious Slavonic Dance in E Minor, Op. 72, No. 2, offered another taste of the Philharmonic’s Wagnerian blending of sound, while Brahms’ Hungarian Dance No. 1 returned to the warm good humor of Schubert.