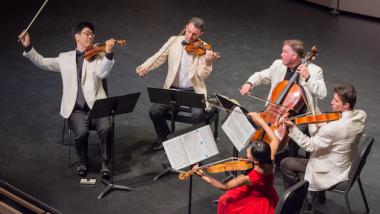 The theme of this year’s [email protected] festival is “The Glorious Violin.” The concert programs, in good Menlo pedagogical style, are proceeding down the history of chamber music featuring this instrument. The second regular concert, on Sunday, July 16, at the Menlo-Atherton Center for Performing Arts, and repeating Tuesday, July 18, at Menlo School, took on the high Classical style, culminating in the trinity of Haydn, Mozart, and Beethoven.

Despite the already long history of the violin as a versatile and virtuoso instrument — testified to in the previous Saturday’s concert of the Italian Baroque — violins, and strings generally, were secondary instruments in chamber music of the early Classical era involving keyboards. The metamorphosis of the violin into a leading instrument is chronicled in Haydn’s Piano Trio No. 45 in E-flat, Hob. XV:29. Each movement begins with the piano dominant, while the violin slowly becomes more prominent, with the cello backing it up.

The highly compatible, moderate tones of violinist Arnaud Sussmann and cellist David Finckel in Sunday’s performance made the cello sound like the bass line of the violin. Combine that with Gilbert Kalish’s clean, plain articulation and the result was highly civilized, courtly music. A touch of pathos in the Andantino middle movement, facilitated by frequent key changes, and a lively dance-like finale gave the work some variety.

Sussmann, substituting for an absent performer, joined pianist Gloria Chien for Mozart’s Violin Sonata No. 35 in A, K. 526. This was originally published with the violin marked as secondary, but it’s a genuine equal partnership as the two instruments trade phrases from the beginning. This is one of those dangerously simple Mozart works, in the sense that it requires subtlety and depth of performance to keep it from being drab. Sussmann’s almost subliminal emphasis on notes in the middle of phrases, and a softly declamatory approach to the darker realm of the Andante middle movement, and Chien’s flowing style and varied articulation were the secrets to keeping Mozart emotionally affecting.

Since Mozart’s and Schubert’s string quintets are centerpieces of their chamber music repertoire, it’s odd that Beethoven’s one full-length original quintet, in C Major, Op. 29, is so neglected. It was written in 1801, and thus is considered poised on the edge between Beethoven’s early classical period and his middle “heroic” period. As played on Sunday, though, it occupied a dark and esoteric sound world, more like late Beethoven or even late Schubert than anything from either of the earlier periods. A slow, earnest approach to the opening Allegro moderato contributed largely to this impression. First violinist Soovin Kim led the ensemble with decisive crispness. The rich accompaniment came from second violinist Adam Barnett-Hart, violists Hsin-Yun Huang and Pierre Lapointe, and cellist Keith Robinson.

The concert was completed with two unaccompanied caprices by virtuoso violinists of the same period. Both works were more soulful and proto-Romantic than any of the other works on the program, but they otherwise differed greatly. Kim played the Étude No. 22 in B-flat by Rodolphe Kreutzer (the dedicatee of Beethoven’s “Kreutzer” Sonata), a work alternating slow passages with tumbling passages of quick notes. Barnett-Hart offered the Duetto for solo violin by Giovanni Battista Viotti, which earns its title by being written largely in double stops with ornamentation in one line at a time. Both offered more melody than display, and would make good encore pieces for violin soloists looking for something quiet that connoisseurs would appreciate.

The educational value of the concert was enhanced by the “Encounter” lecture Sunday afternoon by Christopher H. Gibbs of Bard College. He spoke of the emergence of classicism both in composition and in performance practice, focusing on violinist Ignaz Schuppanzigh, a friend of Beethoven’s. Schuppanzigh was leader of the first professional string quartet, and was one of the creators of the serious repertoire concert, the kind that put music by Haydn, Mozart, and Beethoven at its center.