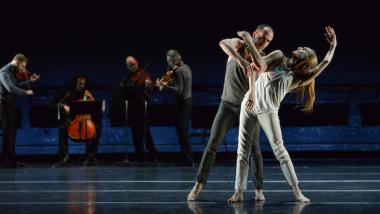 In Some of a Thousand Words, the magnificent Wendy Whelan, partnered by choreographer Brian Brooks and accompanied by the string quartet Brooklyn Rider, shows what was lost when at 47 she retired from the New York City Ballet, and what a treasure was found.

Presented by San Francisco Performances, the show, by the time you read this, has moved on from the Herbst Theater, a two-day tour stop. But if you watch Whelan in the terrific 2013 documentary Restless Creature, available on Netflix, you can glory in her stunning technique and stage presence.

Whelan retired after 30 years at the City Ballet. A world-acclaimed principal dancer at the top of the roster, she had begun to be passed over for roles that had securely been hers, and felt blatantly ignored, she said in the documentary, by the top echelon of company management. It hurt, as did a hip, which had been problematic but was now identifiably an injury. She had to take months off to rehabilitate. But it never felt quite the same.

Finally, company director Peter Martins put it to her: Did she want the audience to watch her powers diminish? She decided to leave.

Whelan, of her generation, best embodied the modernity and daring instilled by the City Ballet’s choreographers, from George Balanchine (she made her debut in the company he founded on the day he died; the ballet was his Western Symphony) and Jerome Robbins, to current director Peter Martins and today’s cutting-edge dancemakers, among them Christopher Wheeldon and Alexei Ratmansky, who jointly choreographed her tribute dance the night of her gala farewell.

Which returns us to Some of a Thousand Words. Of its five composers, the best-known are John Luther Adams (“Maclaren Summit” and “Looking Towards Hope” from The Wind in High Places) and Philip Glass (String Quartet No. 3, “Mishima”). Brooklyn Rider, standing upstage for the entire hour (except for seated cellist Michael Nicolas), also includes Johnny Gandelsman and Colin Jacobsen, violins, and Nicholas Cords, viola. Their riser is a significant furnishing in the minimalist setting, and their music is seamlessly integrated with the dancing. Brooks is significantly half of the cast, but the show was made for, and belongs to, Whelan.

Now 50, she looks all ballerina — slim, even delicate. But driven by her passion to keep dancing, she deploys a will of iron — and an artificial hip. Moving from pointe shoes to bare feet has somewhat mitigated the demands on her body, but the suppleness and flexibility, the musicality and affinity for experimentation developed in 30 years at the City Ballet are going strong.

Though abstract, Some… is steadily compelling. It has a certain gleaming austerity in its simple, casual-wear costuming and lambent lighting. Its dances, dubbed Movements 1, 2, 3 and 4, conclude with the Glass, titled “First Fall” and expanded by Brooks from its origins at the 2012 Vail International Dance Festival.

Movement 1, to Jacob Cooper’s Arches, introduces first Brooks, then Whelan, whose pairing has a seamless unity and hints of things to come in moves playful and challenging. The second movement, to Tyondai Braxton’s ArpRec1 would win high marks as a flawlessly paired ice dance, its perfectly matched moves setting up the kind of rubric familiar to those who have seen Robbins’s 1983 Glass Pieces, with its solo he created for Whelan.

The third movement, violinist Jacobsen’s BIT, animates the quartet as well as the duo. The Riders look like they’re about to start dancing. Instead, they frolic, via antic scratchy mouse-music, bowing over their bridges and maybe into the woods. Whelan goes deep here, and we see, as she turns her back and then moves in profile, her exquisite control of every extremity, whether on one bent leg or extending a long, supple arm straighter than yours might extend even if that were the only thing on your to-do list.

And given Whelan’s months of rehabilitation after two hip surgeries (her first was for a labral tear, and when that didn’t take, her second was for a total artificial replacement), her lively energy in myriad arabesques is even more remarkable to see.

The fourth movement, to the Adams pieces, sets up a rarefied athletic competition where the ideally matched twosome, clambering onto and off of spindle-back chairs, supports and then outwits each other. It ends in a bow and a watchful camaraderie.

That’s intensified in the final movement, “First Fall,” lit with a gray glow on the now even barer stage. If this is an apotheosis, it’s a beautiful and urgently alive one, with dives into catches and the suggestion that she can support him as well as he can support her – and he does, hopping her along in arabesque the width of the proscenium. True to the title, she falls on him and then to a rising tempo, they stand, moving backward and then securely forward, Brooks supporting Whelan in increasingly bold, angular poses. Restlessness is all.

Only months after retiring from the New York City Ballet at 47, the famous principal ballerina performs new works by four male choreographers who also dance with her on stage.

The first American to join the Bolshoi Ballet relates the story of his rise, fall, and hard-won comeback.

Joy Is the Operative Word for the Joffrey Ballet at Zellerbach