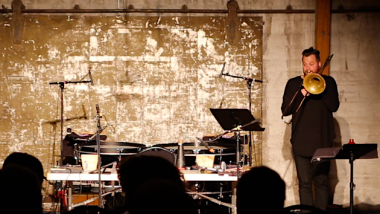 Truth in advertising can sometimes render reportage superfluous, and the good folks at wasteLAnd scored a bullseye with the above description of their latest concert. In a three-word nutshell, that’s pretty much what I heard at Art Share L.A. deep within the downtown L.A. Arts District Friday night, Nov. 8. No further comment is really necessary. But we’ll try anyway.

Art Share L.A. is a casual maze of galleries and performance spaces, one of which housed the concert behind a set of double doors. It’s a decent performance space with exposed wiring and pipes in the ceiling and the obligatory brick wall. There was supposed to be a $15 ticket charge, but since wasteLAnd’s recent fund-raising campaign was a success, admission was free. Refreshments consisted of large jugs of water and bags of potato chips from Trader Joe’s. Parking — usually a major headache downtown — was also free in an elevated lot just across the street. WasteLAnd was doing whatever it could to welcome its audience to a rigorous program that pushed toward the extreme ends of the avant-garde.

First was an etude for solo trombone, Oraculum, by the jazz trombonist/composer and longtime member of Chicago’s Association for the Advancement of Creative Musicians (better known as AACM), George Lewis. Manipulating a plunger mute on his instrument, occasionally puffing into the mouthpiece or shaking his embouchure, Matt Barbier made a variety of disconnected atonal sounds for 11 minutes, concluding with what could have been mistaken for the honkings of a mad elephant. Lewis has created some very interesting material — most recently the musical travelogue Soundlines: A Dreaming Track at the last LA Phil Noon to Midnight jamboree in June — but Oraculum struck me as little more than a virtuoso stunt.

Michelle Lou’s untitled three part construction was a return performance from Feb. 2016 during wasteLAnd’s third season, now presented in a “new version” for Barbier’s amplified trombone and percussionists Dustin Donahue and Nicholas Deyoe. Mostly, the piece consisted of various gritty, grunting statements from the trombonist while his cohorts twirled the cranks of ratchet-like devices or made knocking sounds on a table — all amplified and/or electronically distorted. In what may have been the third part of the construction, the trombone temporarily dropped its grungy pose and sounded lonely and sustained over the grindings and knockings. With good timing, just as my patience was beginning to run out, the piece was over.

KILN 1 by Timothy McCormack had the virtue of showcasing two instruments not often seen in concert halls — the lanky contrabass clarinet (played by Brian Walsh), and the euphonium (played by Barbier), which is roughly halfway in size between a baritone horn and a tuba. Donahue was in charge of two massive bass drums that were floor-mounted like tom-toms, and a third smaller bass drum operated by a kick pedal. McCormack resisted exploiting the more characteristic timbres of his instruments, asking for mostly grumbling noises from Barbier, multiphonics from the extreme top of the instrument’s register from Walsh, and gentle scraping of the heads of the bass drums, with occasional kicks for emphasis from the drum on the floor, from Donahue.

Save for some menacing growling and blasts near the end, the result was a slow, sustained, surprisingly peaceful voyage lasting over half-an-hour, during which the mind was free to wander, conjuring humming motors of a cruise ship passing through the night. It would have been well-suited for a rug concert with cushions and pillows on the floor.

Two Contemporary Composers Make Meaning in the Space Around Their Music