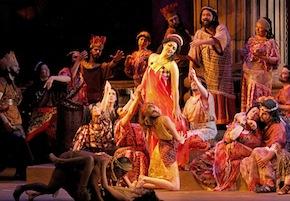 Camille Saint-Saëns’ 1877 Samson et Dalila is an opera you expect to see in the mega-houses of Paris and New York, not in the Palo Alto company’s Lucie Stern Theatre.

Not the full French romantic/melodramatic treatment of Chapter 16 of the Book of Judges, complete with the destruction of the Philistines’ Temple of Dagon, on a stage of 26 x 36 x 16 feet. (For comparison, the region’s last Samson took place on the War Memorial stage, which is 52 x 64 x 116 feet.) Why, that’s almost like slaying an entire army with only the jawbone of an ass — one of Samson’s previous accomplishments.

“Dungeons & Dagons” notwithstanding, the biggest challenge for West Bay’s current adventure is to find the right singers for the principal roles. It’s done. Samson, who has his work cut out for him even if Saint-Saëns didn’t give him a big aria (against three for Dalila), is Percy Martinez, the young Peruvian tenor heard and praised here before. His is a lyrical “French tenor,” but with the right hint of steel under it. His diction and legato were exemplary.

In the true title role, Cybele Gouverneur makes an impressive West Bay debut. The Venezuelan mezzo, known for her performances in San Jose and San Francisco (where she will sing Mercedes in the upcoming family matinees of Carmen), has a big, velvety voice, which she projects expertly to fill the house. Chances are it could be a much larger house than this, and the effect would be the same. An up-and-coming major talent.

David Cox made a fine contribution as the High Priest of Dagon (aka Dalila’s father), while Matthew Lovell and Carlos Aguilar did well as the Satrap (governor) of Gaza and an Old Hebrew, respectively.

Moscovich’s conducting started more tentatively than usual, and until the performance really caught fire with the big Act 2 duet (which was terrific), he mostly maintained a cautiously slow tempo. It might have been a wise decision, because on this outing the orchestra was experiencing problems, especially the strings, where individual instruments stood out occasionally (and not in a good way). Woodwinds and brass fared better, and in the climactic moments it all came together.