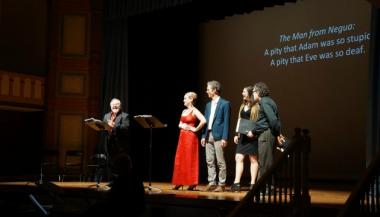 How does opera sound in the 21st century? Anything goes, judging by West Edge Opera’s second Snapshot program, which mounts excerpts of new operas with musicians from Earplay. The February 25–26 program was a mixed bag, but the sheer range of works, alone — from the conventionally masterful to the atmospheric and bizarre — makes next year’s season, which General Director Mark Streshinsky announced, a space to watch.

Husband-and-wife team Allen Shearer (composer) and Claudia Stevens (librettist) have created several operas together, and Howards End, America is another strong show. The libretto masterfully adapts the E.M. Forster story to McCarthy-era Boston, and when socialite Helen (Amy Foote) exclaims, “When I use up my trust fund, I’ll get work as a cook!”, it’s clear that she won’t.

There’s plenty of drama in this excerpt (conducted by Jonathan Khuner), including the birth of Helen’s illegitimate child, an ensuing fight between her sister Margaret (Julia Hathaway) and Margaret’s formerly philandering husband, Henry (Daniel Cilli), and a death. But truncation robs some of these scenes — in particular, Helen’s alienation — of their significance, and, in the excerpt’s final moments, spoken portions, which would enjoy music, disable the potential impact of a character’s death.

Howards End, America’s dynamic orchestral score, however, makes up for these minor dramatic weaknesses. Stevens assisted Shearer with the evocation of labor pains — deliriously swelling sound-masses — and well-developed musical themes help each singer come into his character: upright, forceful music for stern Henry, an ironic rendition of “Merrily We Roll Along” for Helen’s former lover, the downtrodden Leonard Bast (Darron Flagg, a fine actor, though his light voice was often lost), and alternately lyrical and jagged motifs for Margaret, who mediates between the others.

On the other hand, Carla Lucero’s Touch, about Helen Keller, stumbles in its musical premise. Lucero devises two musical schemes: one for Keller (Molly Mahoney), and another for the outside world of her lover, Peter Fagan (Joe Meyers), and her caretaker, Anne Sullivan (Hathaway). However, the outside world’s lilting tonal music isn’t very interesting — and it dominates the excerpted scene. Because Helen doesn’t sing, it’s a challenge for Lucero to give her character’s compellingly off-kilter music enough attention. Only fleetingly does the audience glimpse her inner world, such as when Peter reads one of her poems. Touch is better dramatically, especially when protective Anne questions the appropriateness of Peter’s love. “I can’t live without her,” Peter and Anne both sing, though their pitches diverge in this powerful ending.

In The Stranger the Better, composer Liam Wade and librettist Vynnie Meli (randomly paired in Atlanta Opera’s 24-Hour Opera Project, which generated the work) poke fun at the notion of drama, itself. This 10-minute comic opera is a send-up of A Streetcar Named Desire — where Blanche is played in drag by Meyers, in his best performance of the evening, if only for his disdainful “Bless his heart.”

Blanche enters to the strains of Also Sprach Zarathustra and the riding of Valkyries, among the loving references to the classical canon in Wade’s friendly musical score. The other idiom is New Orleans-inspired jazz, for Mahoney’s richly sung Creole Voodoo Princess. Foote was perfectly harried as Stella, who lists various items she’s unearthed while dusting, and, as Stanley, Cilli’s overblown “Lies!” was the opera’s most humorous line, although there are many in Meli’s libretto, which memorably rhymes “days” with “beignets.”

One work on Saturday’s program, Linda Bouchard’s The House of Words, did away with all dramatic convention. This surreal one-hour chamber opera (conducted by Mary Chun) overlaps, with little logic but much fun, short stories from Eduardo Galeano’s The Book of Embraces, which touch on everything from ancient warriors to television.

The vocal material is thorny: the background ad-libbing felt stilted, and Meyers was a little hammy as a featured narrator. Bouchard’s orchestration, however, is a treat. She maximizes the half-dozen players (cellist Leighton Fong, flutist Stacey Pelinka, and violinist Kate Stenberg gamely joined Kevin Neuhoff on percussion), foregrounding the piano (Keisuke Nakagoshi) and bass (Kristin Zoernig), whose sharp glissandi and snap pizzicato define the pulse. After an initial instrumental, these players are relegated to the background as a whirlwind of talking and singing ensues — but what a background.

The adventurous company steps into the breach with a new festival featuring new operatic works in development.