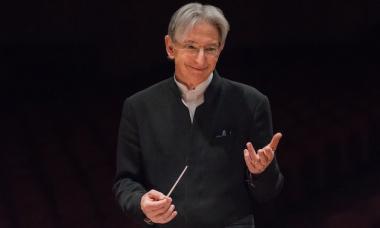 For his last year as music director of the San Francisco Symphony, closing out a remarkable 25-year tenure, Michael Tilson Thomas has chosen to look back at many works and composers with which he has had success in the past. While it would have been fascinating if he had decided to perform more repertory new to him, historically MTT’s interpretations have deepened considerably as he repeats works in different years. For example, Beethoven’s Missa solemnis grew over three sets of performances, from 2011 to 2015, to a profound, coherent, and majestic interpretation of a complex and difficult work.

MTT’s performance of Robert Schumann’s Symphony No. 3 in E-flat Major (“Rhenish”) followed much the same path. I found his “Rhenish” uninspired during the year he recorded the symphonies with the orchestra, but Friday night’s performance of this symphony was as good as it gets. MTT and the orchestra utterly belied the canard that Schumann couldn’t orchestrate well, playing with a sound that was burnished and transparent at the same time. It’s true that the upper strings could occasionally have had more presence, but that’s one of the unfortunate features of the Davies acoustic.

MTT’s attention to balance meant that you could hear all of the beautiful inner voices and the details of the wind writing, not just Schumann’s wonderful melodies. MTT paced the Rhenish magnificently; the first movement had tremendous rhythmic vigor and drive, as well as great dynamic contrast. It was the kind of performance the audience should applaud immediately, except that we don’t do that sort of thing anymore.

In fact, every movement was that well performed; the second and third movements had a marvelous degree of tempo flexibility from phrase to phrase, like a great pianist playing Chopin or Schumann. The horns and trombones were awesome in the expansively-paced fourth movement, an homage to Cologne Cathedral. The last movement, even though taken more broadly than I would consider ideal, still had a remarkable, simmering energy.

The concert opened with John Adams’s new work, I Still Dance, which was co-commissioned by the San Francisco Symphony and Carnegie Hall. It’s dedicated to MTT and his husband Joshua Robison, and in brief remarks before the performance, MTT termed it the kind of music you’d find in a dance club in outer space.

Maybe, maybe not. This eight-minute whirligig is a charmer, a perpetual motion machine harking back to Adams’s early minimalist works, while having the rich orchestration of the composer’s more recent large-scale pieces. Restless wind figurations over brass and percussion outbursts give way to brass over string figurations; the percussion and strings shift from a major key to a minor key. Eventually, the bustling calms down, and I Still Dance fades away quietly.

Between the Schumann and Adams came Rachmaninoff’s Piano Concerto No. 4 in G Minor. The young virtuoso Daniil Trifonov was the soloist, giving a poised and even self-effacing performance in which he called attention more to the music than himself. This concerto isn’t primarily piano showpiece; the orchestra is to the fore much of the time and takes the lead as much as the piano does.

Trifonov has a light, clear touch on the piano, even in its low register, and played suavely throughout, but the real magic of his performance was in the Scriabin Étude, Op. 42, No. 3, which was dreamy and intimate, in contrast to the extroversion of the concerto.

I Still Dance is the latest work Adams has written for the orchestra.

The dramatic work showcases the powerful 25-year partnership between conductor and orchestra.