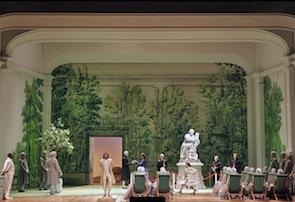 This seems to be San Francisco Opera’s season for premiering major operas of earlier centuries that it has heretofore overlooked. On the heels of its first mounting of Donizetti’s 1834 opera, Lucrezia Borgia, comes the first production of Handel’s 1738 Opera Xerxes. Company General Manager David Gockley could not have assembled a finer cast, nor chosen a more consistently delightful production for an opera that SFO’s superb Principal Guest Conductor Patrick Summers considers one of Handel’s “thorough masterpieces.”

Director Michael Walling’s revival of Nicholas Hytner’s marvelous production, which won England’s Laurence Olivier Award in 1985 for “Outstanding New Opera Production of the Year,” assigns Handel’s male castrato role of Xerxes to mezzo-soprano Susan Graham, and the female soprano role of Arsamenes (Xerxes’ brother) to countertenor David Daniels. It also brings to the fore the many camp elements of the convoluted plot, which seem right at home in David Fielding’s whimsical setting. The results seem ideal for Handel’s one and only operatic comedy.

Unlike many modern-day directors, who in their attempts to impose novel conceptions on classic operas and in the process often ignore what the music is saying, Walling knows how to listen. He understands the gravity beneath the plot’s absurdities, and the intensity of the character’s feelings. Time and again, hilarious hand movements, facial expressions, and body language underscore the emotional turmoil and ironies implicit in Handel’s florid runs. What in coarser hands might have degenerated into mere coloratura spectacle constantly astounds with its emotional as well as musical eloquence.

Walling also takes advantage of the production’s setting in London’s historic Vauxhall Pleasure Gardens to mock the attitudes of fashionable London. Without giving away what he and this production do — from the character introductions during the overture and extending to the choice of makeup for principals, servants, and the elite masses — let’s just say that he is ever alert to opportunities to illumine as well as delight.

Any attempt to encapsulate the plot is bound to elicit the same laughter that Handel and his anonymous librettist were aiming for. Xerxes, the clueless King of Persia, begins the opera by declaring his love for a tree. Once beyond that gorgeous outpouring, “Ombra mai fu,” Xerxes loses sight of the tree amidst a jungle of lovelorn confusion.

If, as in the case of Mozart’s Don Giovanni, it’s no laughing matter to see lovers torn one from another, plotted against, and threatened with exile and worse, Handel and his unknown librettist use comedy to bring out the madness of amorous obsession. While it’s hard to believe, given all the emotional uproar that many of the principals experience, that some don’t end up confined to an asylum, the story ends in a far happier, smiling place than Giovanni’s hell.

The cast and conducting are extraordinary. Graham, as gifted in Baroque coloratura as she is in Romantic lyricism, tosses off her many interpolated embellishments with the warm, seductive sound for which she is prized. Her instrument may not be ideally suited to Xerxes most furious outpourings — her smooth phrasing would ideally be more biting and brilliant — but her voice and artistic commitment sweep all before them.

Daniels has an equally smooth, astoundingly fluent voice whose size is a fine match for Graham. As with many members of the cast, his embellishments bring out the craziness of the crazy libretto. Both stars invest their long-breathed, roller coaster lines with the surfeit of emotion essential to conveying their characters’ inner feelings.

As Amastris, Sonia Prina’s huge range, strength, and uncommonly clear articulation of mile-a-minute runs are just as impressive as they were in SFO’s 2008 production of Handel’s Ariodante. Her first aria elicited some of the loudest cheers of the afternoon. Heidi Stober as Atalanta, previously engaged here in lyric roles, displays such ease with coloratura, and such bloom on top, that it feels as though we are first hearing all she has to offer.

Making her San Francisco Opera debut, 2005 Metropolitan Opera National Council Auditions winner Lisette Oropesa as Romilda displayed a most engaging light soprano with an especially lovely top. The highest notes may not boom out, but their sweetness and fragility cuts right to the heart. Michael Sumuel, a big man who can click his heels with the lightness of Tinkerbell, has an extremely handsome, coloratura-fluent voice that is a pleasure to listen to. He’s also a scream in drag. Wayne Tigges’ instrument may be less distinguished, but how many bass-baritones with particular strength on bottom are fluent in coloratura? Hands down, this is an exceptional cast.

Conductor/harpsichordist Summers and the San Francisco Opera Orchestra, abetted by a few Baroque specialists, work wonders. Summers has the sweep and rhythms of the Baroque in his blood, and draws the best out of his forces. The chorus is more seen than heard, but acts its faceless part flawlessly. After a few missteps, San Francisco Opera is back on track with a brilliant cast and production.