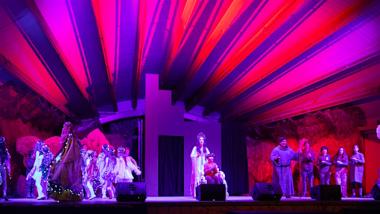 In 2012 a recently transplanted mezzo-soprano named Rebecca Comerford, who had worked extensively with the Metropolitan Opera’s outreach program for youth, found herself living in the intellectually unique farming community of Ojai  — the same idyllic valley of orange and olive groves that had attracted Igor Stravinsky, Indian educator Jiddu Krishnamurti, and modernist artist Beatrice Wood, and that had served as a stand-in for Shangri-La in the 1937 film, Lost Horizon.

When Comerford was introduced to Julija Zonic — a highly regarded music teacher and soprano who had found her way to Ojai by way of Bosnia and Croatia — the idea of creating a summer opera youth camp was born. Since then, Ojai Youth Opera has offered young people (ages 7–18) a chance to take part in an intensive operatic and foreign language experience.

Saturday, OYO unveiled its grandest project to date — the world premiere of a full-length commissioned opera, Nightingale & the Tower, freely adapted from the 1843 fairy tale by Hans Christian Andersen.

The libretto, set in “a dystopian world on the outskirts of Ojai, sometime in the not-too-distant future,” was conceived by Comerford and the electronic music composer (and member of the rock band Wilco), Mikael Jorgensen. It transposes Andersen’s story about a Chinese Emperor’s infatuation with a mechanical bird into a modern parable about our ever-growing reliance on digital technology. It also comments on the threat of global warming and abuse of the natural environment, emotional damage caused by parental abuse, and the destructive impact of peer bullying.

The work has seven significant roles for young singers, six professional adult singers, a bevy of fluttering butterfly dancers, and a children’s chorus — a total of 36 in all.

The problem with Nightingale & the Tower is that it attempts to tell a complicated weave of storylines and comment on social issues while blending together a pantry’s worth of musical styles. What the opera is missing is cohesion.

Add the almost three-hour length of Saturday’s performance and rain that forced the outdoor audience at the Libbey Bowl to huddle under raingear and it’s not surprising that a large percentage of the audience departed at intermission.

The adult members of the cast were consistently noteworthy, led by the dulcet coloratura soprano of Sequina Dubose (as the mechanical bird, Philomena), the resounding contralto of Nicole Joy Mitchell (as the Empress), and soprano Julija Zonic (as Sandra, a single mom raising a disabled son). But the fortitude, professionalism, vocal consistency, and harmonic blending of the young singers proved truly impressive. And these kids were required to perform an essentially atonal, recitative-based score and to execute contrasting vocal lines that are not mirrored in the opera’s orchestration.

Arshan Barati sang the central role of Teo, a 10-year-old, wheelchair-bound boy who journeys into the woods where he finds a young nightingale with a broken wing (sung, with an abundance of coloratura flutter, by Kaylie Turner). Teo is soon joined by a rowdy pack of neighbor kids who are totally reliant on their electronic devises. The gang is led by Rusty (Quinn Davis) a bully who lives with his abusive, drunken father, Pete (Joseph Flaxman). From there, the opera follows almost as many plot lines as Game of Thrones, making its messages  too confusing to unravel.

Similarly, the score reflects too many cooks in the kitchen. The majority of the music was composed by Treuting, who performed his own percussion parts on opening night. He employed a formula that established a repeated rhythmic pattern that was accentuated by the instrumental ensemble: violin, viola, flute, cello, clarinet, and electronic keyboards. The seemingly disconnected vocal lines were suspended above. It’s a formula that settled into a monotonous sameness.

In contrast there were exceedingly melodic sections — songs of almost Broadway quality, lyrical duets (between Teo and his mother), and ensembles. The waving pulsations of electronics contributed by Jorgensen served mostly as bridges between the multiple scene changes.

But then there was the wonderful long-string harp  — referred to as the “Sonic Butterfly” — created and performed by Andrea Brook. Like a magician, Brook stroked electronically sensitized strings that stretched the entire length of the performance space, causing melodic pulsations that added a magical dimension. (Sadly, her performance was greatly hampered by the falling rain).

The elaborate lighting, projections, and scenic design are by Freddy Solis, Darvik Productions, Christopher Ulvio, and Armando Ramos, with costumes by Jesse Huber.

It’s hard to know whether there will be a future for Nightingale & the Tower beyond its two Ojai performances. If there is, it will take some serious editing and refocusing. But there is no question that for the young cast members that took part, this was an experience they will not soon forget.

Strong performances lift an often-charming opera from sinking in its own syrup.

The 2009 Broadway musical by the songwriting team behind La La Land gets a terrific production at San Francisco Playhouse.