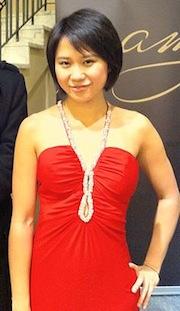 Yuja on Fire at the S.F. Symphony

Great performers often get their big breaks by substituting for more senior, great performers, who are ill or indisposed. Yuja Wang is a pianist who’s gotten more of these breaks than most. Earlier in her career she made her name substituting for Yefim Bronfman, Radu Lupu, Murray Perahia, and others. Now all of 25, she’s long reached the point of being a legitimate headliner herself. This year she’s touring the U.S. playing Rachmaninov’s monumental Piano Concerto No. 3, and on Thursday at Davies Symphony Hall gave the first of four performances with the San Francisco Symphony under Music Director Michael Tilson Thomas.

Yuja (as she reportedly likes to be called for short, Wang being a common name) plays with a crisp tone and a slightly echoing effect like solid wooden blocks being struck. It’s reminiscent of the style of Martha Argerich, another pianist whom she’s substituted for and one whose work hers is often compared to. This dry, hard character makes for great rumblings in the bass and gives a welcome solidity to the high-lying scherzando passages Rachmaninov is so fond of. Only in a few lyric moments did Yuja opt for a smoother, gentler tone. If there was an opulent, romantic sound in this concerto, it came from the orchestra, where the strings tended towards the lush and the winds were full. One strange brass clam in the first movement, and that was it for performing problems.

Throughout the concerto, Yuja played with all-out fire only in a few passages. There she was really fiery, forearms reduced to blurs, moving faster than mere photons could keep up with, and every note solid. It wasn’t so much her speed or blazing energy that impressed, fine as they were, as it was the sheer strength and weight with which this slightly-built young woman pressed down on every note and chord for forty long minutes. Her melodic grace in cadenzas and other florid passages was clear; her contributions where the piano rummages around underneath the orchestra were substantive and well mixed in. Though this was an unabridged performance of notably garrulous music, the concerto kept moving forward and did not ramble.

During a joint curtain call, MTT gestured to Yuja to sit at the piano for an encore, while the conductor took his own seat among the violinists. She gave a lively run through Art Tatum’s jazz takeoff — re-composition, really — of the 1925 Vincent Youmans song Tea for Two. It filled the song with high runs and an amusing false ending. Then the modest Yuja stood and quietly exited the stage, while MTT, still among the violins, stared after her imploringly, and finally by gestures secured her return for one more bow.

If the Rachmaninov was fun and exhilarating, the Sibelius Symphony No. 3 that preceded it was supernal. This spare and introverted, yet strangely beautiful, little symphony doesn’t get played very often. Herbert Blomstedt made a fine recording of it with SFS in 1994, and these concerts are the only other time the orchestra has played it since Pierre Monteux gave the local premiere in 1942. (Monteux also led the first SFS performance of the Rachmaninov concerto, with the composer as soloist, the previous season. Oh, to have been here then! Oh, to be here now!)

This performance felt like a throwback to MTT’s earliest seasons, when Blomstedt’s stamp was still strong on the orchestra. MTT proved here that he can do what Blomstedt does, which is to lead a sober, intricate performance of transcendental beauty and craftsmanship, while adding the sheen that is his own particular contribution to SFS’s greatness. The tone quality was dry and austere, and the flow of the music was quiet and subdued; even the final climax, the only real fortissimo in the symphony, didn’t blaze away. What this restraint did was force the listener’s attention on the beauty of the cultivated details: the heartfelt divided cello passage in the slow movement, the stopped horns’ first intimation of the grand theme that emerges in the finale.

The secrets to this performance were the consistently excellent and well-considered playing, and MTT’s attention to keeping the music driving along, same as he did for the concerto. At one point in the slow movement, he turned entirely away from the winds playing the theme — they were doing well enough on their own anyway — and focused his conducting entirely on the comparatively inaudible pizzicato rhythm in the lower strings. That’s the sort of care a great conductor knows when to take, and this is how a great orchestra plays in response.

The concert opened with one of the classic “oh yeah, I know this melody” bon-bons, Pavane by Gabriel Fauré, in its purely orchestral version (it’s often given with superfluous added choral parts). This work exists simply to show off an orchestra’s tone color. With good performers, it needs no other purpose. Flutist Tim Day introduced the main theme with minute flexibility of note lengths as only he can do it. The performance told the audience, accurately, that the rest of the concert would be equally wonderful.