It's rare that an interesting new opera simply appears, without the fanfare of commissions and publicity surrounding the premiere. Yet composer Allen Shearer's second opera, The Dawn Makers, is poised to do just that, when it debuts at San Francisco's Herbst Theatre on Feb. 4, conducted by J. Karla Lemon, directed by Brian Staufenbiel, and produced by Composers, Inc.

Shearer wrote the opera with no immediate performance in view, yet while hoping that its small cast (five singers) and seven-person orchestra would make it performable. But as he finished it, the artistic directors of Composers, Inc. (including Shearer himself) met to plan a big 25th anniversary season. They wanted "to make a big splash" and do something ambitious. Within a short time, they had signed up to be opera producers — and The Dawn Makers was set to go.

The opera is based on the Greek myth of Eos, goddess of the dawn, and Tithonos, a young Trojan. Knowing that his mortality will be a drawback to their continuing relationship, the goddess asks that her lover be made immortal — neglecting to seek eternal youth for him. This is a big mistake, for Tithonos withers away but does not die. As Shearer recounts, he first heard this myth on lecture tapes from the Teaching Company, on which Elizabeth Vandiver described Tithonos as being reduced to a voice without a body. The goddess eventually turns him into a grasshopper. 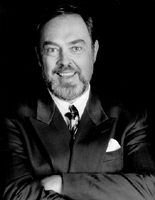 Shearer was struck by the operatic possibilities of a character who is all voice and no body, and the thought led him to work on the opera. In theatrical reality, limitations of budget and space will make it impractical to work that transformation on tenor John Duykers' body, but the creators promise that they have found something suitable instead.  Particularly as updated by Shearer's librettist, Claudia Stevens, the story has a decidedly comic tilt. The horses of the goddess' dawn chariot become teenage girls when not in harness. And there's the additional character of Bo, a former pool man, whom the goddess is grooming as her next lover. But despite its Southern California references, the libretto is existential comedy, and in conversations with Classical Voice the creators reflected on some of the ideas it contains. Challenges in Growing Old

"Aging has become a real problem for us," said Shearer. "And I did note [on the Web] that there is a Tithonos Society, which has to do with the right to die." For Stevens, "There is also a connection with Alzheimer's. The loss of dignity in old age has to do with dementia, and so on. And that gave me the idea to give Tithonos a failing memory — not just a deteriorating body, but to have him losing the memory of the people closest to him. So the climax occurs in the third scene, when he no longer recognizes Eos, the goddess, which is more than her ego and vanity can stand."

The collaboration between composer and librettist was especially close, in that they are also husband and wife. "We did a lot of brainstorming around the kitchen table," said Stevens. But of course there were the eternal tensions between the two specialties, with the composer asking for fewer words ("I like to clear things out," he said).

Shearer, a singer as well as a composer, writes in a 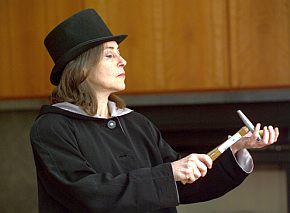 chromatically extended version of major–minor tonality, and doesn't mind the label "lyrical" as a description of his compositional style. Still, as he says, opera represents a chance to extend yourself, because the challenges of illustrating characters and situations forces you to augment your toolbox. As an example, Shearer noted that "The two horses, who are also teenage girls, speak Valley Girl talk, and so I had to support that with a little rock-and-roll here and there." "Can you do that?" I interrupted. "Well, I didn't think I could, but I did," he responded. Stevens, a former pianist, now a monologist, had an easy time, for the most part, writing the libretto. She often profited, she readily admits, from the vigorous storytelling in TV's daytime soap operas. The strongly differentiated diction of her characters results in an equally varied score by Shearer. The continuity and glue of his music comes from the tiny orchestra, which, in addition to the usual strings, has a guitar ("a harp in the Mount Olympus setting is maybe too much of a good thing," Shearer explains), along with "quite a bit of percussion."

If good casting is the main ingredient in a successful opera production, then Composers, Inc. would seem to have covered itself in glory. Shearer had star soprano Christine Brandes, who has sung his music before, in mind from the beginning for the goddess of the dawn, and Duykers for the role of Tithonos (called "Victor" in this version). Both agreed enthusiastically to lend their talents. For Bo, the pool man, the group secured rising star baritone Eugene Brancoveanu, and even the two teenagers/horses are well cast with locally prominent singers Anja Strauss and Erin Neff. The direction is by the steady, experienced Brian Staufenbiel, and the production is led by conductor J. Karla Lemon. All this augurs well for "the big splash" that Composers, Inc. is hoping for on Feb. 4.

Will it be the breakout piece for Shearer? "More than a breakout piece, I yearn for writing that one really good piece," he confides. "As a composer you have to be self-critical and hard to please." He is, it seems, constantly revising his pieces, which is usually a good thing in opera. So if the opera does turn out to have legs, expect it to change in later incarnations. In that way, the life of an opera is like the music itself — a journey from one place to another, and in constant motion.